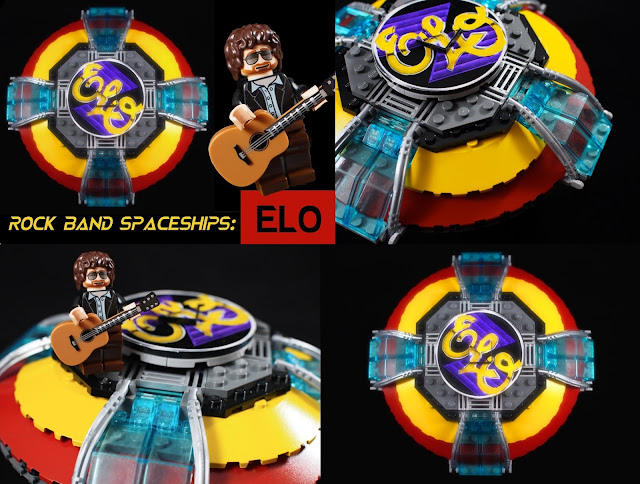 #1,339: Yours Truly KJS and elobeatlesforever (elobf) have been asked to help get the word out regarding an ongoing campaign to persuade LEGO to issue an ELO/Jeff Lynne Spaceship set via their Ideas programme where 10,000 supporters are needed to advance the project to formal review by the LEGO board. There are just 45 days to go and many more backers are needed to take this ELOtastic proposal further. Here's the official overview to whet your appetite:

Great rock bands have great spaceships, and the Electric Light Orchestra, or "ELO", had one of the greatest. In 1970, Jeff Lynne and friends formed the Electric Light Orchestra and fast became one of the most successful rock/pop acts of the 70's and 80's, with millions of records sold worldwide. The band's icon was originally based on a jukebox speaker design, but ELO's interest in futuristic sounds and imagery soon turned the iconic red and yellow disc into a spaceship or space station which adorned the cover of many of their best-selling albums. This LEGO version is a hand-held, "swooshable" version of that ship, complete with a cockpit that seats Jeff Lynne and his guitar! Thrusters on the bottom enable successful landings and takeoffs from any interplanetary surface! The Jeff Lynne mini figure sports his iconic large round sunglasses and shaggy mane. "Shine a Little Love", make some "Strange Magic", and fly this ship across "Mr. Blue Sky"!

Please consider signing up and supporting this worthwhile adventure via this link thus: