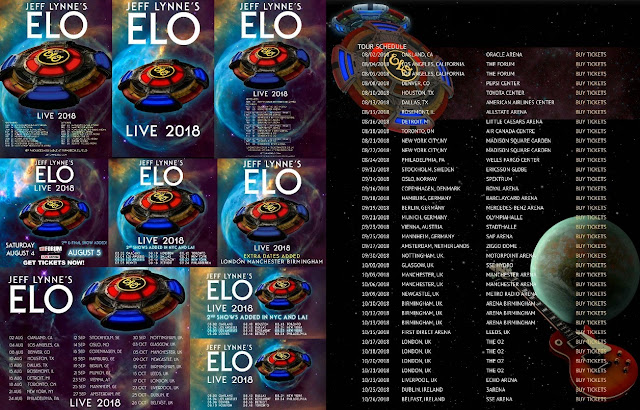 #1,341: Timed perfectly on the second anniversary of the release of "Alone In The Universe" and just four days before the much anticipated multi-format "Wembley Or Bust" hits the shelves, Jeff Lynne's ELO finally confirmed an initial total of 29 dates in the UK, North America and Europe earlier today (Monday 13th November). This will be the largest ELO tour (hopefully with Richard Tandy back on board) since their 1981-82 "Time" dates and includes the most extensive set of US dates in 35 years as well as a handful of welcome gigs in Scandinavia.

Pre-sales begin tomorrow morning (Tuesday 14th) with tickets going on general sale on the morning of Friday 17th November. Yours Truly KJS and elobeatlesforever (elobf) have pulled together and listed all known dates (at the time of writing) along with ticket ordering links for you to peruse below thus:

We also look forward to the release of a new Jeff Lynne's ELO studio album next Spring/Summer in advance of the above as yet untitled tour. Expect more UK dates in Birmingham and London to be announced upon buoyant ticket sales (as there are plenty of gaps in the schedule) too. Additional dates elsewhere (perhaps in Australia/New Zealand) are also a possibility. Good luck with your ticket purchasing!