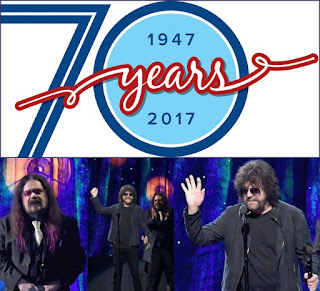 #1,314: As we approach the final quarter of 2017, two of the three official founding members of The Electric Light Orchestra (ELO) are approaching a significant milestone. Whereas Bev Bevan will be 73 years of age as of Saturday 25th November, both Roy Wood and Jeff Lynne will be celebrating their 70th birthdays on Wednesday 8th November and Saturday 30th December respectively. This being despite the "Confusion" generated in this Guardian article last year where they initially stated Roy's age as 70 (as did Yours Truly KJS and a number of well known media sources) prompting Woody to declare his then correct age of 69 on his Twitter page, as covered in this elobeatlesbeatlesforever (elobf) article thus:

We can therefore look forward with confidence to both Roy and Jeff reaching the grand young age of seventy in the coming months with their many fans and admirers perhaps thinking of inventive ways in which to mark both occasions whilst not forgetting Bev's birthday in the midst.