Out Of The Blue: Picture Disc Release Delay 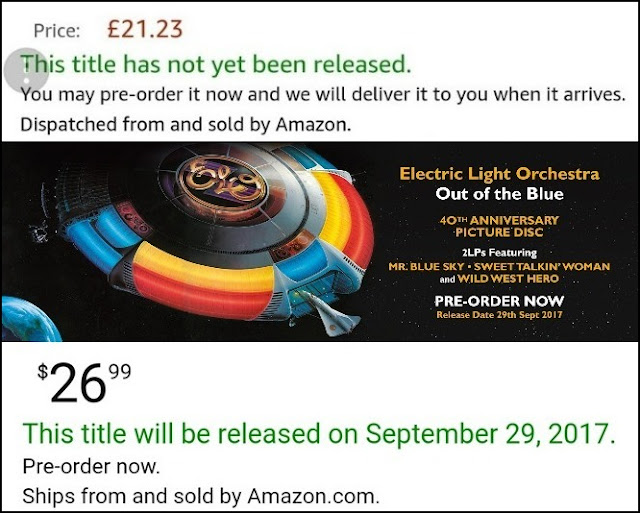 #1,320: There appears to be a little "Confusion" as to whether the much anticipated release of the Electric Light Orchestra classic Jeff Lynne penned double album opus "Out Of The Blue" as a picture disc set (889854561611) will in fact occur on Friday 29th September with mixed signals coming from amazon.co.uk, amazon.com and sandbagheadquarters.com (the official merchandising agent for Jeff Lynne's ELO).

Whereas amazon.com and sandbagheadquarters.com continue to quote the originally cited release date of 29th September, amazon.co.uk - having initially quoted the same release date - are now stating that "This title has not yet been released" having issued an email to their customers on 8th September that they didn't have an estimated delivery date for the item. amazon.co.uk tend to quote imminent release dates for pre-orders so the fact that they are not stating a release date with under a week to go is somewhat surprising.

Yours Truly KJS has ordered via the Jeff Lynne's ELO Shop and has received no notification of a change in release date. If there is a delay, it is likely due more to a healthy pre-order oversubscription or manufacturing issues. It may also be the case that customers in the US will receive their purchases on time with UK/EU customers following thereafter. ELO fans "All Over The World" should therefore "Hold On Tight" to their pre-orders as there is no need to panic!

The 2017 2LP picture disc incarnation of OOTB has been remastered from the original master tapes, includes a digital download and is set to be a prized possession for fans and collectors alike. Pre-orders can still be placed via these links thus:

elobeatlesforever (elobf) recommends "Out Of The Blue" by Electric Light Orchestra to those enlightened folks who enjoy the music of ELO/Jeff Lynne, Roy Wood, The Traveling Wilburys, The Move, The Idle Race, 'Brum Beat', The Beatles and related artistes.