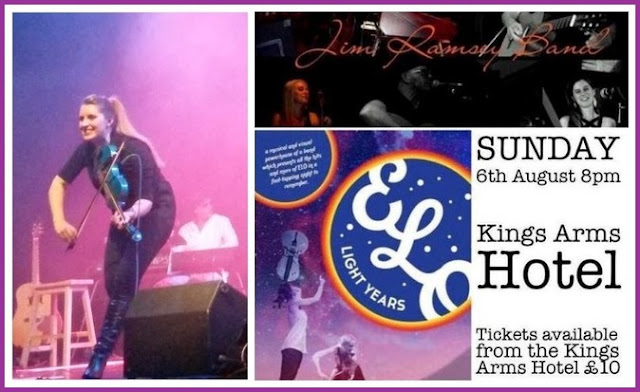 #1,298: A very special gig is on the cards in the South Wales market town of Abergavenny when The Jim Ramsey Band and his ELO Light Years troupe will bid "Bon Voyage!" to Gaëlle Favre, their talented and effervescent violinist, as she returns home having secured her dream job back in France. The concert will feature two bands and nine musicians with The Jim Ramsey Band up first playing their own original material followed on stage by elobeatlesforever (elobf) endorsed ELO Light Years (also, of course, led by Jim) in acoustic mode performing the music of the Electric Light Orchestra.

Former ELO Again violinist Gaëlle, who is often seen sharing instruments on stage with fellow cellist Sarah Waycott, has always caught the eye and ear of Yours Truly KJS during her shows and, I'm sure, will be most surely missed by her band mates and admirers. The event will take place at The Kings Hotel in Abergavenny on Sunday 6th August at 7:30PM. Tickets are now on sale priced at £10 each and can be purchased either in person or by contacting the venue on (01873) 855074.