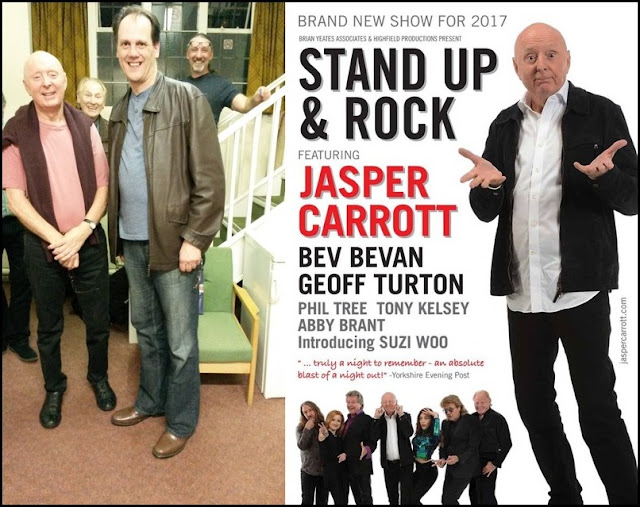 #1,295: Having been very much looking forward to another installment of the excellent Stand Up & Rock! in Chesterfield on Friday 29th September in the company of my good friend Mick Anyon, Yours Truly KJS was surprised and concerned to receive this open message from Brummie comedy legend Jasper Carrott earlier this week thus:

"Sadly, I have been told very recently that I need a heart bypass operation. Whilst it’s not desperate it is obviously something which I need to get done as soon as possible. All being well, the operation will take place in August and there will then follow a three month recovery period after which I anticipate being able to return to work as normal. Unfortunately this affects a number of shows which unavoidably must be postponed until at least early Spring next year. My sincere apologies to all the theatre-goers who have bought tickets to my shows but I know you will understand that my health comes before anything and I will do my level best to get back in action as soon as possible. Thank you for your understanding and again my apologies for the disruption and inconvenience to everyone concerned. Kindest regards ... Jasper Carrott"

The postponement applies to all previously announced dates in July and September until the tour recommences in Shanklin, Isle of Wight on Wednesday 7th March 2018.

A Birmingham Mail report yesterday (click here to view) stated that tickets for the original shows are valid for the rearranged dates with refunds also available. elobeatlesforever (elobf) has compiled this updated Stand Up & Rock! gig roster incorporating the postponed dates thus:


It goes without saying that Yours Truly KJS wishes Jasper Carrott a speedy recovery from his procedure and looks forward seeing him on stage again in 2018.

Find out more about the tour, the venues and dates via these links thus:
www.jaspercarrott.com/tour-dates
elobf: NEW LOOK STAND UP & ROCK SET FOR 2017 RETURN
yeatesentertainment.co.uk/touring-shows/jasper-carrott-stand-up-and-rock/671

*** Please note that elobeatlesforever (elobf) waited until this news was revealed via 'official' news outlets before publishing this article in order to prevent any perceived invasion of privacy. ***