Cover to Cover: On The Third Day 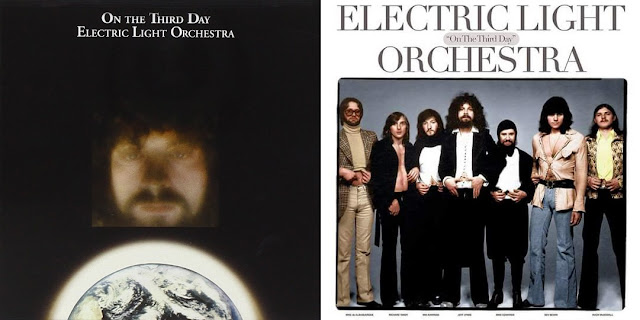 #1,297: As an eager new (and young) ELO fan back in 1977, once Yours Truly KJS had snapped up "A New World Record" (#UAG30017) and "Out Of The Blue" (#UAR100), it was quite natural to start trying to negotiate their back catalogue, as pocket and odd job money would permit. First up was the 1977 Harvest compilation "The Light Shines On" (#SHSM2015) with its quirks and nuances, Roy Wood and more which was followed by a second hand copy of the first reissue of ELO's "On The Third Day" album (Jet/UA #UAG30091) sporting that somewhat amusing Richard Avedon photograph of the band revealing their belly buttons. Back then, sightings of the original gatefold sleeved pressing for OTTD on Warner Bros. Burbank label (#K56021) were rare and far too expensive for me. But I do remember wondering what the reason was for the repackaging. I eventually came to the conclusion that it was to visually identify ELO as under the sole guidance of Jeff Lynne following their departure from Harvest/EMI. Then came the change from Jet/UA to Jet/CBS with "On The Third Day" now sporting a new catalogue number (#JETLP202) as well as its inclusion in the 3LP boxed set "Three Light Years" (#JETBX1) alongside, of course, "Eldorado" and "Face The Music".

And that essentially was it until the purchase of Bev Bevan's share of the Electric Light Orchestra name and rights by Jeff Lynne in 1999 for an undisclosed sum. Following in the wake of 2001's "Zoom", a remastered and expanded "On The Third Day" - now including "Showdown" - hit the shelves in September 2006 replete with the original album artwork. And so it has been since. One cannot but wonder if the reason for the reverting of the OTTD sleeve back to the original was symbolic of the desire of the ELO maestro to underline his full ownership of the ELO brand (as opposed to band) in much the same way as it made a statement about the identity and direction of a Jeff Lynne led ELO back in 1973. One thing is for sure, "On The Third Day" remains highly regarded by both Jeff and elobeatlesforever (elobf) here in Yours Truly 2017.

Which "On The Third Day" album cover do you prefer?