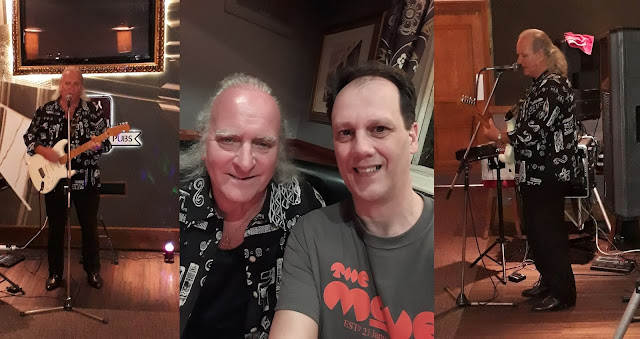 #1,291: Unbelievably, it's been thirty months since I've had the pleasure of attending a gig by 'Brum Beat' legend Jim Onslow so when he announced a last minute date at the relatively nearby Cleveland Arms on Saturday evening (1st July), Yours Truly KJS made sure of being there to see Jim - a former member of Gerry Levene & The Avengers and, of course, Denny Laine & The Diplomats - perform over forty songs covering four decades of music in his own amiable style.

As well as being a man who shared the stage with The Beatles at The Cavern, Roy Wood, Bev Bevan, Graeme Edge (later of The Moody Blues), Jim has also enjoyed an extensive career based in and around the West Midlands and Shropshire and is still going strong. Backed by own recorded tracks, the Brummie musician sang and played the guitar in a manner reminiscent of those much loved solo gigs by the late, great Kelly Groucutt back in the early nineties. Highlights again were many but nice covers of "You Got It" (Roy Orbison/Jeff Lynne), "('Til) I Kissed You" (The Everly Brothers), "Out Of Time" (Chris Farlowe), "Johnny B. Goode" (Chuck Berry) and "I Saw Her Standing There" (The Beatles) truly hit the spot. It was a real pleasure to also spend not a few minutes chatting with Jim about his career right up until the present day, from a time when residencies were the norm to 2017 when pubs, clubs and venues are struggling to survive. If Jim Onslow is gigging near you, Go see him! Find out what Jim Onslow is up to and/or listen to his music via these links thus: