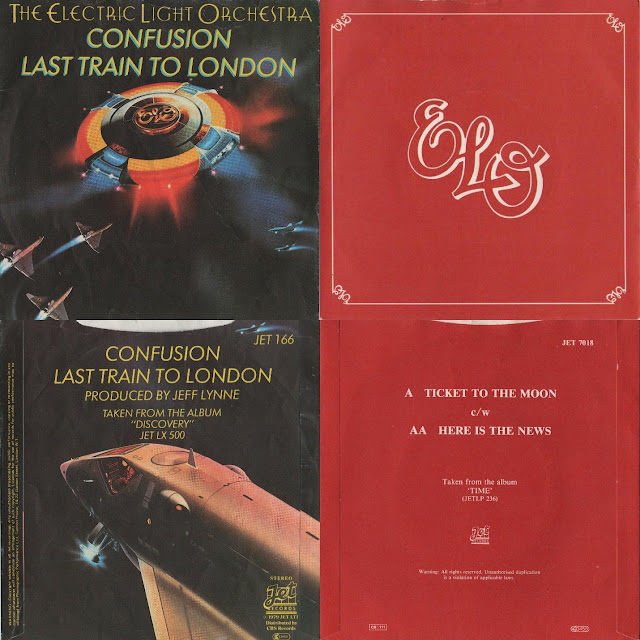 #1,283: Aside from coloured vinyl, picture discs and 10"/12" singles, one of the marketing techniques invented when single sales were king was the release of double 'AA' sided singles. Instead of the usual 'A' side backed by an obscure (or even familiar) 'B' side, casual record buyers and avid fans were treated to a double whammy making such releases attractive, particularly if they were following successful lead singles in promoting healthy album sales. It therefore came as no surprise to see Jet Records issue two 'AA' side singles in the UK when ELO were at their commercial peak.
Released as the fourth single from ELO's first UK #1 LP "Discovery" following the Top 10 trio of "Shine A Little Love" b/w "Jungle" (SJET144), "The Diary Of Horace Wimp" b/w "Down Home Town" (JET150) and "Don't Bring Me Down" b/w "Dreaming Of 4000" (JET153), the policy worked when "Confusion" and "Last Train To London" (JET166) were twinned together to peak at #8, confirming ELO as one of the biggest selling artistes of 1979, even challenging the supremacy of ABBA. 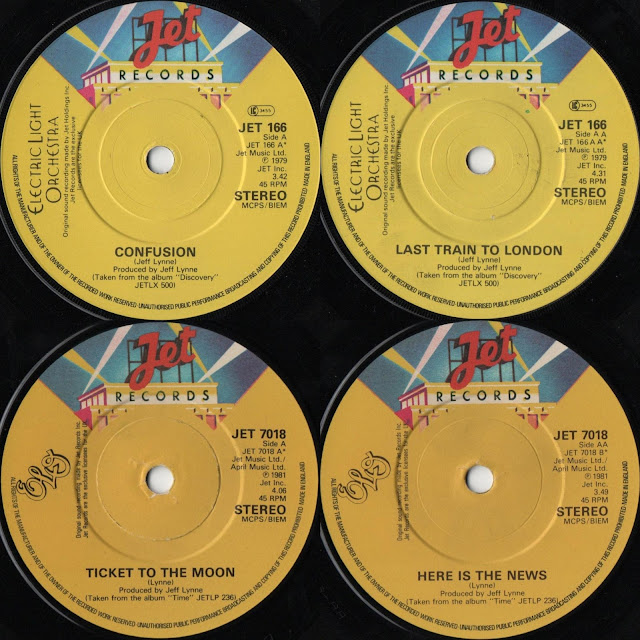 ELO's second 'AA' single came along following in the wake of their second #1 UK album "Time" in late 1981 in slightly different circumstances. Lead single "Hold On Tight" b/w "When Time Stood Still" (JET7011) was a smash hit peaking at #4 thanks partly to its then budget busting promo video. Both record company and fans both expected second single "Twilight" (JET7015) to also do well but were disappointed when it stalled at #30 despite being backed with the previously unreleased "Julie Don't Live Here". Jet duly rolled out "Ticket To The Moon" and "Here Is The News" (JET7018) as ELO's second 'AA' single (also as a highly desirable 12" picture disc), resulting in a significantly better chart placing of #24. Fourth single "The Way It's Meant To Be" b/w "Wishing" (JET7021) sadly failed to chart signalling the ebbing of ELO's stellar UK singles career.
Interestingly, "21st Century Man" and "Twilight" (JET808) were also paired together in France. Although not specifically described a 'AA' single on the sleeve or label, the release is essentially that although the run-out groove for "Twilight" does state "JET 808 B". One can only wonder what might have happened if "21st Century Man" had been released as a single in the UK, particularly as it is still regarded by many as Jeff Lynne's poignant tribute to John Lennon following his tragic death in November 1980.