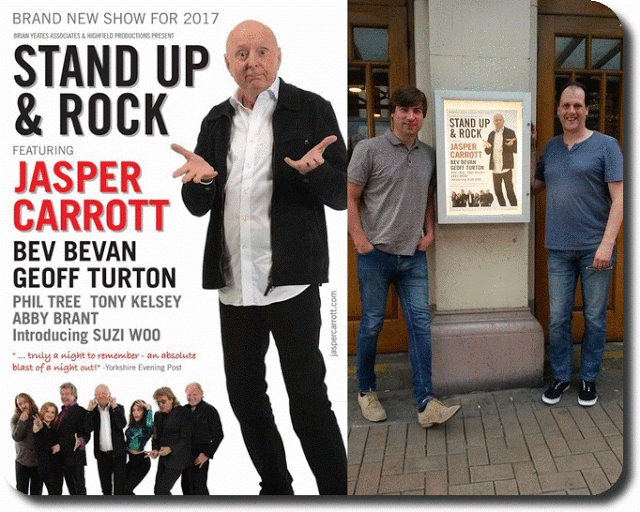 #1,280: Yours Truly KJS took a second look at the 2017 version of Stand Up & Rock! alongside my good friend (and the leading light in ELOBF recommended The 286) Spencer Hannabuss as Jasper Carrott and Bev Bevan rock and rolled into Wolverhampton's iconic Grand Theatre last night (Thursday 1st June).

Whereas the songs were the same as per the show in Telford (see elobf review here), a full house and a polished performance both by legendary comedian Jasper Carrott and best pal Bev Bevan with his most excellent musical troupe ensured another hugely entertaining night of laughter and some superb renditions of classics largely from the Sixties and Seventies. Stand Up & Rock! is truly a show that you can watch again and again yet still leave with a smile on your face after having a great time - even if your 6' 4" frames cannot squeeze into somewhat limited legroom! Needless to say, there's plenty in this show to please fans of ELO and The Beatles. It was also great to see Spencer meet one of his musical heroes in Bev Bevan after the show whereupon you can be assured that Bev was more than adequately congratulated re: his recent RRHoF award (once again, many thanx to Musical Director Tony Kelsey). There are still plenty of forthcoming Stand Up & Rock! shows for you to consider going to see thus:

ELO Beatles Forever (ELOBF) usually include a set list within our gig reviews but on this occasion we've decided to keep you in suspense to encourage you to go see the show (where it's not already sold out) so as to not spoil the theatrical pleasure of later attendees. Stand Up & Rock! featured Jasper Carrott, Bev Bevan, Phil Tree, Tony Kelsey, Abby Brant, Geoff Turton and Suzi Woo. Find out more about Stand Up & Rock! via these links thus:

ELO Beatles Forever (ELOBF) recommends Stand Up & Rock! to those enlightened folks who enjoy the music of ELO/Jeff Lynne, Roy Wood, The Move, 'Brum Beat', The Beatles and related artistes.