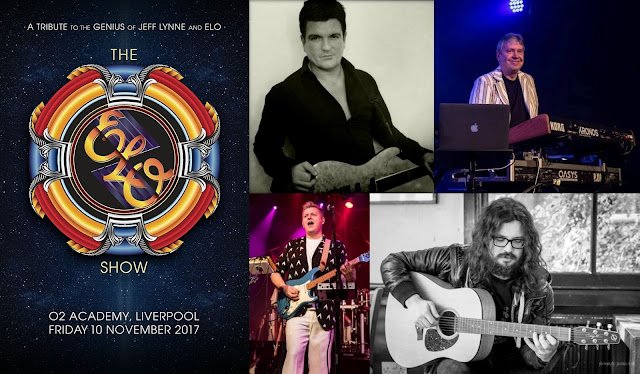 #1,274: A measure of the popularity of the music of ELO and Jeff Lynne is the incredible rise in the number of ELO tribute bands in the UK in recent years. Brian Cummins contacted ELO Beatles Forever (ELOBF) earlier this year to introduce his new project: The ELO Show. Having been privy to some impressive rehearsal recordings, Yours Truly KJS asked Brian, born and bred in Liverpool, about his career to date and The ELO Show in this recent mini-interview thus:

KJS: Please tell me about The ELO Show?
BC: We started rehearsals as The ELO Show earlier this year in preparation of our launch show in November at the O2 Academy here in Liverpool. The band consists mainly of members from established Genesis tribute show The Carpet Crawlers including Raymond Pitt, Chris Watt and Daniel Saleh so hopefully we will be able to do justice to ELO's amazing legacy of songs. We'll also be joined by four ladies who've also worked with the Liverpool Philharmonic on violin and cello.
KJS: What do you feel will attract ELO fans to your shows?
BC: A big factor of the band's appeal will I'm sure will be the production values that we will bring from our Genesis shows including lighting, sound and a top class stage crew.
KJS: You've been an ELO fan since childhood. How excited are you about this project?
BC: I cannot wait to launch this new project! I'm a bit of a chameleon of a vocalist having toured the world performing with some of  my musical heroes such as The Mick Pointer Band (performing the early material of Marillion as 'Fish'), The Security Project USA (performing the early solo material of Peter Gabriel with members of Peter's band and King Crimson) and solo with my 'Plays Live' show. I'm already counting down the days to November!
KJS: The transition from playing the music of Genesis to that of ELO must be interesting?
BC: A lot of work has already gone into this project and it's fantastic music to play, quite tricky but nowhere near as intense as some of the Genesis stuff so we are all just smiling at each other as we play these beautiful songs. I've grown up with a lot of this material since a kid. Obviously coming from Liverpool means that The Beatles are instilled in us from birth, so to play this stuff live really is a dream come true. I'm positive the ELO and Jeff fans (and music fans in general) will enjoy the night.
KJS: Finally - for the "Time" being - how can folks find out more about The ELO Show?
BC: Right now we have a Facebook page at www.facebook.com/TheEloShow and our new web site is coming soon!

The ELO Show perform at The O2 Academy in Liverpool on Friday 10th November. Tickets are priced from £17.50 each and can be purchased via these links thus:

Find out more about The ELO Show via their official websites thus:

ELO Beatles Forever (ELOBF) recommends The ELO Show to those enlightened folks who enjoy the music of ELO/Jeff Lynne, Roy Wood, The Move, 'Brum Beat', The Beatles and related artistes.