This elobeatlesforever (elobf) article is dedicated to those affected by the tragic events in Manchester that occurred just after this concert ended in Liverpool on the night of Monday 22nd May.

#1,278: This was a hard review to write for obvious reasons ... but here goes. Gary Barlow is rightly appreciated by ELO fans for having played a pivotal role in the return of Jeff Lynne to playing live and recording again under the moniker of Jeff Lynne's ELO by persuading the ELO maestro to appear at BBC Children In Need Rocks! back in November 2013. He then promptly lent him the Take That touring band thereafter and invited Jeff to produce the track "Fall Down At Your Feet" on their "III" album back in 2014. It was therefore an easy decision for Yours Truly KJS to return to Liverpool's Echo Arena on Monday 22nd May to see and hear Take That for myself on their "Wonderland" tour, not forgetting that elobeatlesforever (elobf) had also lauded their "Beautiful World" comeback album and tour in 2009 here and here.
First things first: Take That were preceded by a powerful and professional set by All Saints (a supremely successful act in their own right) that included their five chart toppers, my faves being "Never Ever", "Pure Shores", "Under The Bridge", "Black Coffee" and the more recent "One Strike". A real bonus and an inspired choice of support.
And what of the trio from "Mancunian Way" who are Take That in 2017?  This was my first concert in the round and it was truly the perfect stage for a concert that oozed entertainment switching effortlessly from performance to dance to multi-media projection to performance again with twenty five songs spanning the now lengthy career of a group who have reinvented themselves into something of a national institution - judging from the amazing crowd reaction alone. This was a show with Gary Barlow, Mark Owen and Howard Donald jumping (sometimes literally) from set to set and song to song aided and abetted by a remarkable troupe of performers and dancers and, as expected, their most excellent band musically directed by Mike Stevens with fellow EJLO cohorts Marcus Byrne, Milton McDonald, Lee Pomeroy and Donavan Hepburn also in attendance plus Ben Mark.
The majority of a balanced set list featured songs from new album "Wonderland" drawing also from the excellent "Beautiful World" onward with a fair selection of classics from their incarnation first time around. The acoustic medley of "Beautiful World"/"Wait"/"Satisfied"/"Lovelife" with its eastern theme was a surprise and a highlight. If you'd have told me that I'd be at a Take That concert twenty years ago, I'd have laughed at you but tunes such as "Back For Good" and "Never Forget" held up well with later mega-hits "Patience", "Rule The World", "Greatest Day", "The Flood", "These Days" and "Giants". Perhaps it was pure prophecy when "Shine" was written with its huge ELO references (not forgetting the use of part of "Concerto For A Rainy Day" as a preamble in earlier tours) that those links with Jeff Lynne would bear so much fruit a few years later but "Shine" remains my fave TT track and hearing it live for the first time reinforced that view - especially as a fair portion of Jeff Lynne's ELO played it. You therefore won't be surprised to read that here in Yours Truly 2017, I quite like Take That. Go see 'em! 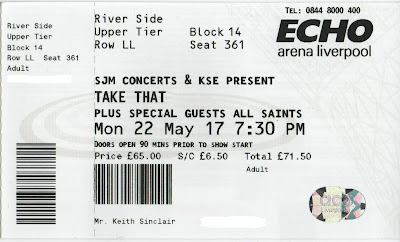 elobeatlesforever (elobf) recommends both "Shine" and Take That to those enlightened folks who enjoy the music of ELO, Jeff Lynne, Roy Wood, The Move, The Idle Race, 'Brum Beat', The Beatles and related artistes.