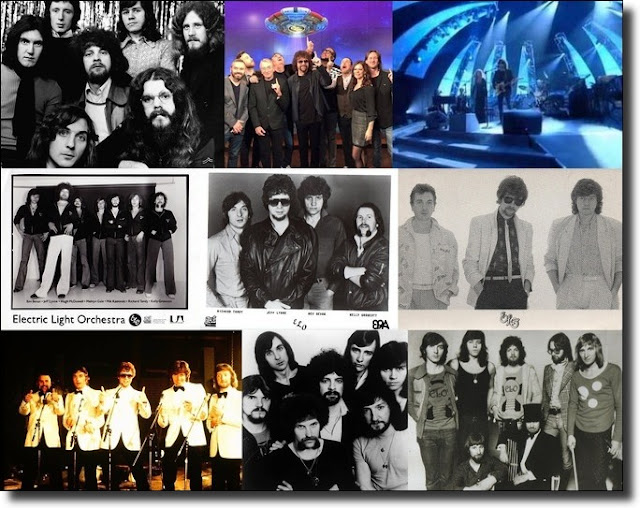 #1,264: Hello ... Hello ... my old friends ... It's great to see you once again! Wasn't it great seeing Roy Wood and Jeff Lynne last week together on stage in NYC for their Rock & Roll Hall of Fame investiture as founding members of ELO? It was, of course, unfortunate that both Bev Bevan and Richard Tandy were not also there (for differing reasons) but also affirming in that the Electric Light Orchestra were taking their place alongside their peers and fellow musical legends.

However much I would have loved to hear the names of former members to the ELO story within the speeches made, Yours Truly KJS and ELO Beatles Forever (ELOBF) thought it would be apt and quite appropriate to name as many musicians, contributors and characters who have played their part in ELO (whether in the studio, on stage or elsewhere) and compile them into this roster of 91 names (in alphabetical order) below thus:

My elder brother Rob introduced me to ELO when I was but a ten year old back in 1977 and ELO were a settled septet at that time. Their membership (whether in the studio or on stage) has expanded and contracted over the years and the idea of this article - published on the 45th anniversary of the live debut of ELO at The Greyhound in Croydon on Sunday 16th April 1972 - is to pay tribute to each and every musician who has played a part in a band whom the late, great Tony Curtis once famously said were (and still are) "the most outstanding rock group in the world today." Many thanx to Messrs. Jet Flynne, Jeff Cooper and John Devitt for filling in the gaps!