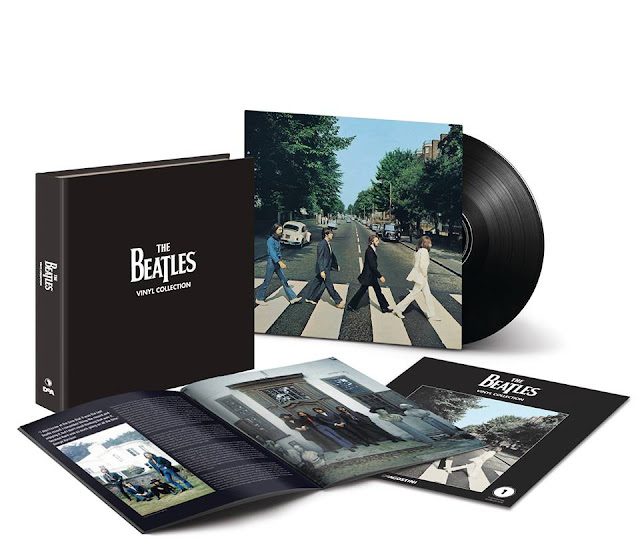 #1,244: Hello ... Hello ... my old friends ... It's great to see you once again! Yours Truly KJS received the following official press release a few hours ago regarding the forthcoming Beatles Vinyl Collection now being advertised on TV, radio and social media in the UK. The strong bonds between The Beatles, the formation of The Electric Light Orchestra and the ensuing career of Jeff Lynne mean that the many fans of ELO are also followers of The Fab Four (and vice versa). elobf is pleased to confirm that the 23 album collection will include both "Anthology 1" and "Anthology 2" which, of course, include the Jeff Lynne produced singles "Free As A Bird" and "Real Love".

NEW COLLECTION OF THE BEATLES’ ALBUMS ON 180g VINYL LAUNCHED IN UK
On Wednesday 1st March 2017, global part work publisher DeAgostini is launching, in association with Apple Corps and Universal Music Group, The Beatles Vinyl Collection. Featuring 23 albums, it will be available to purchase online and in newsagents all across the UK.

Issue by issue, the #BeatlesVinylCollection of single, double and triple albums builds into a comprehensive library of the momentous music made by The Beatles. Presented in exact replicas of the original sleeves, the specially pressed 180-gram vinyl LP's ensure the music will be heard in the best quality sound. Remastered at Abbey Road Studios in London, The Beatles’ reissued LP's have been universally acclaimed by sound experts and the group’s fans. Produced by George Martin in the 1960s, the albums contain some of the most celebrated recordings ever made.

The Beatles Vinyl Collection includes such groundbreaking albums as Sgt. Pepper's Lonely Hearts Club Band, Abbey Road, Revolver and Rubber Soul, as well as intriguing compilations like the three volumes of The Beatles Anthology and two Live At The BBC collections.

Amanda Honeybun, Marketing Director at DeAgostini, said: “We are so excited to launch The Beatles Vinyl Collection, which will give people of all ages the opportunity to collect on vinyl the greatest albums in the history of music. Our Beatles Vinyl Collection makes it possible to buy these wonderful records from the comfort of your own home or at your local newsagent. Then all you have to do is put the needle on the record to enjoy the best recordings ever made by the best group of all-time!”

Each album also includes an illustrated magazine containing the stories behind the group’s renowned recordings. Written by Beatles historian and award-winning radio producer Kevin Howlett, each issue reveals details about the creation of an album and an assessment of its significance within not only The Beatles’ legacy, but also the history of music. Kevin said: “It was such a privilege to write about this joyous music. The Beatles have inspired generation after generation of music fans, songwriters, artists and producers. I’m also delighted that there is a resurgence of interest in collecting records. For music lovers, nothing can beat the look of a stylish LP cover and the authentic experience of listening to a classic album on vinyl.”

The global vinyl market is booming. Sales of records in 2016 reached a 25-year high as music buyers embraced this attractive physical format. More than 3.2m LPs were sold in 2016, an annual rise of 53% and the ninth consecutive year of growth. The Beatles Vinyl Collection is DeAgostini’s fourth vinyl collection. The company’s previous collections of Jazz, Blues and Classical Music proved very popular. This new collection establishes DeAgostini Publishing as one of the leading vinyl album market producers and distributors. The Beatles Vinyl Collection is a 23-part series. Issue one will be priced at £9.99 for a limited time only, with subsequent single album copies retailing at £16.99; double and triple albums will sell for £24.99. Issues are available fortnightly in shops, with subscribers receiving two issues in one delivery every four weeks. Subscriptions can be purchased online at www.deagostini.co.uk/beatlesvinyl" [end quote]

elobeatlesforever (elobf) recommends The Beatles Vinyl Collection to those enlightened folks who enjoy the music of ELO, Jeff Lynne, Roy Wood, The Move, The Idle Race, 'Brum Beat', The Beatles and related artistes.