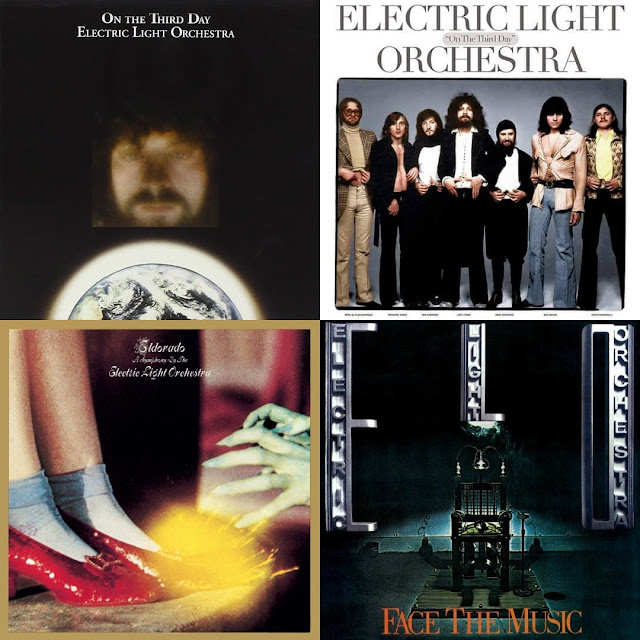 #1,251: Hello ... Hello ... my old friends ... It's great to see you once again! One of the major surprises that Yours Truly KJS encountered after buying my first 7" record "Turn To Stone" (UP36313) in late 1977 and discovering ELO at the age of ten was that when I started to track back to their previous albums, I was amazed that neither "On The Third Day", "Eldorado" or "Face The Music" managed to trouble the Official UK Album Chart. After a good start with their first two Harvest/EMI albums attaining #32 and #35 respectively and despite singles "Ma Ma Ma Belle" (#22), "Evil Woman" (#10) and "Strange Magic" (#38) all making the Top 40 - not forgetting that "Showdown" also reached #12 (although it was not originally a part of the UK release of "On The Third Day") - it really is quite astonishing that these ELO albums did not chart in their home country. Particularly disappointing was the fact that an edited version of "Can't Get It Out Of My Head" failed to make the UK Singles chart too.

Over in the United States,  the same albums was an ever improving performance in the Billboard 200 with "On The Third Day" attaining a respectable #52, "Eldorado" deservedly breaching the Top 20 in reaching #16 and "Face The Music" making the breakthrough into the Top 10, also receiving RIAA Gold certification. Doubtless this was the fruit of ELO's many extended tours in the US and their success would continue thereafter for several years.

Yet, back in the UK, despite their reputation for delivering fantastic gigs, ELO struggled in terms of album sales due in part to their change of record label from Harvest/EMI to Warner Bros. to Jet/Polydor and their concentration on the American market (whilst they remained with United Artists during that time). This tragedy was corrected (in a fashion) when all three albums eventually made the UK Album Chart in late 1978 as part of the boxed set "Three Light Years" (JETBX1) whilst managing to reach #38 in the wake of the amazing success of "Out Of The Blue" and those celebrated spaceship dates.