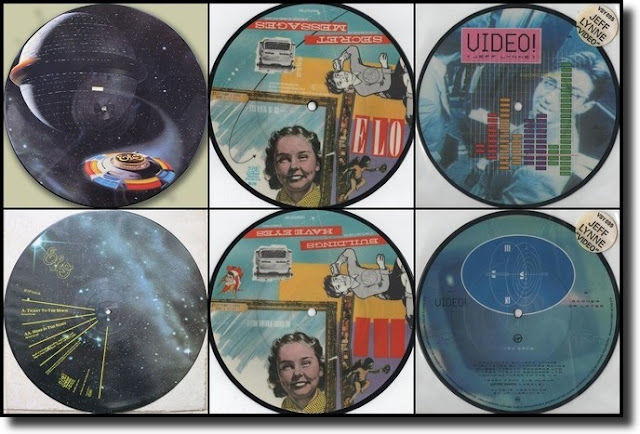 #1,239: Hello ... Hello ... my old friends ... It's great to see you once again! Back in January, Yours Truly KJS wrote an article for elobeatlesforever (elobf) on the subject of ELO's 10" singles, specifically those issued to promote the singles "Xanadu" (with Olivia Newton-John) and "All Over The World" from the "Xanadu" OST during Summer 1980. In addition, earlier this week, the answer to the quiz that came with ELO's first and only UK 7" picture disc "Secret Messages" (WA3720) in 1983 was also revealed in this elobf article hence the idea for this article on the subject of the trio of ELO/Jeff Lynne picture discs issued in the UK - not forgetting that ultra-rare double-sided 33⅓ RPM US promotional 10" picture disc of "Xanadu" (MC10384). 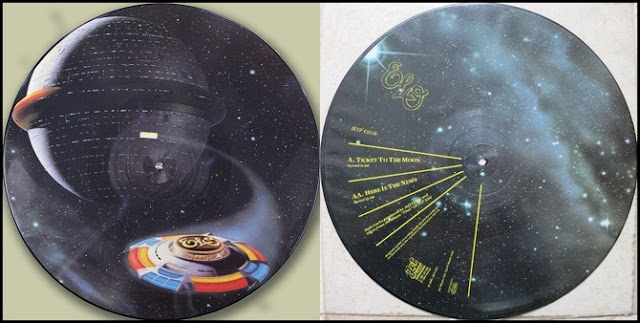 1981: Following the success of "Time" lead single "Hold On Tight" b/w "When Time Stood Still" (JET7011) reaching #4, the disappointment of "Twilight" b/w "Julie Don't Live Here" (JET7015) stalling at a relatively lowly #30 led to Jet/CBS issuing what was ELO's second and final double 'AA' sided single "Ticket To The Moon" c/w "Here Is The News" (JET7018) - their first being "Confusion" c/w "Last Train To London" (JET166) in 1979. ELO's one and only 12" picture disc (JETP12018) was issued to bolster sales of the third single taken from "Time", depicting the ELO spaceship zooming away from what looked like a version of the Star Wars 'Death Star', making it a highly desirable collectors item for fans whilst propelling the single to a more respectable #24. 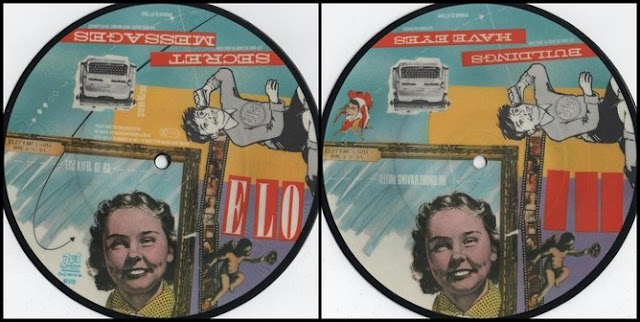 1983: When "Secret Messages" lead single "Rock 'n' Roll Is King" b/w "After All" (A3500) peaked at #13, thus failing to make the UK Top 10, Jet/CBS issued ELO's first and only UK 7" picture disc in support of second single "Secret Messages" b/w "Buildings Have Eyes" (A3720) hoping that the relative success of the "Ticket To The Moon" b/w "Here Is The News" 12" picture disc some eighteen months earlier would be repeated. Although it was another hit with loyal fans and offered the rare opportunity to win a "Secret Messages" gold disc, the single itself fell somewhat short of the Top 40, managing only #48. 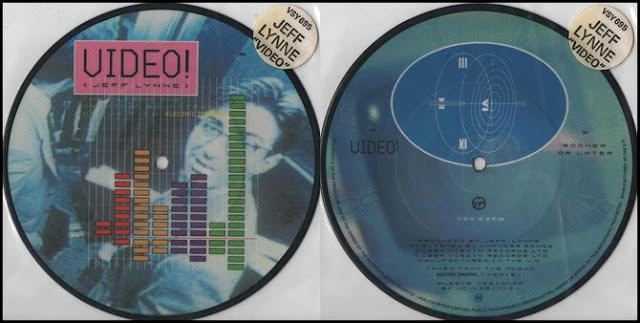 1984: In the ensuing three years hiatus between "Secret Messages" (JETLX527) and "Balance Of Power" (EPC26467), ELO fans were perhaps surprised to see a Jeff Lynne solo single (ELO in all but name to many) released. Taken from the "Electric Dreams" OST, "Video!" b/w "Sooner Or Later" (Virgin VSY695) also saw release as a 7" picture disc with elements of "Video!" later revealed to include snippets of "Beatles Forever", the song that would have been a pivotal part of the originally intended 2LP release of "Secret Messages (JETDP402). "Video!" peaked at a modest #87. It was only the second ever Jeff Lynne solo single, following "Doin' That Crazy Thing" b/w "Goin' Down To Rio" (UP36281) in 1977.
If nothing else, the artwork and imagery of ELO - those wonderful album sleeves that we all know and love - absolutely lends itself to release in picture disc format . This is one area where ELO's record labels have missed great opportunity down the years, specifically in the marketing and promoting of the many ELO remasters, reissues, compilations and recent new material. What price in these days of vinyl resurgence of an "Out Of The Blue" or "Eldorado" or "Alone In The Universe" (or any other ELO album) as a 12" picture disc?