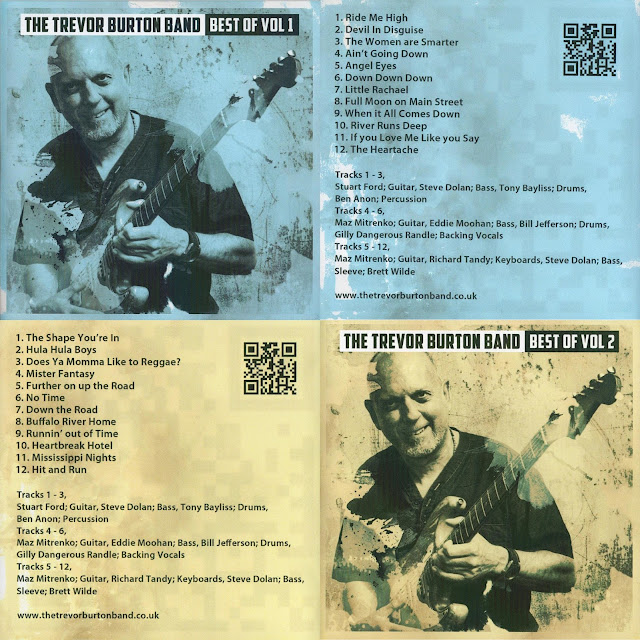 If you can get past the tape hiss that permeates the first three tracks on either CD, you will partake of a wonderful cocktail of covers, interpretations and original material befitting the reputation of one of the best (if not undiscovered) guitarists still doing the rounds here in 2017. The trademark vocals of Trevor grace a variety of musical styles which both surprise and leave you nodding in appreciation. In places you can hear early Dire Straits ("Ain't Going Down") or Santana ("River Runs Deep") whereas in others there's a Springsteen ("The Heartache") vibe. The influence of ELO keyboard maestro Richard Tandy shines through in the majority of both albums (taken from "Blue Moons") with his song "Mississippi Nights" also a highlight. Trev's alternative take on Elvis' "Heartbreak Hotel" is a triumph with classy Blues permeating the whole affair. Look out for the autobiographical "Hit And Run" and its mention of five Brum lads seeking fame and fortune!
Both volumes of this excellent career overview completely impress upon first listen (and beyond). My personal faves right now are "Buffalo River Home", the aforementioned "Mississippi Nights", the sublime "Mister Fantasy", "When It All Comes Down", "River Runs Deep", "Full Moon On Main Street" and, quite frankly, every other track! Buying an album (or albums) is sometimes a gamble and sometimes a disappointment. Yours Truly KJS is pleased to say that "Best Of The Trevor Burton Band Vol. 1" and "Best Of The Trevor Burton Band Vol. 2" are both worthy investments whilst opening your ears to the legacy of a musician (and his band, past and present) deserving of much more acclaim and attention than is at present afforded him (and them). (10/10).