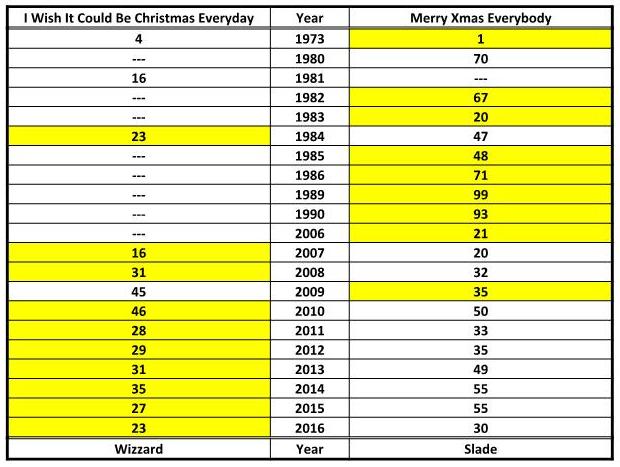 #1,219: Hello ... Hello ... my old friends ... It's great to see you once again! The welcome news that the Wizzard festive hit "I Wish It Could be Christmas Everyday" reached #23 in the Official UK Singles Chart during Christmas 2016 prompted elobeatlesforever (elobf) to take a look at how often the much loved Roy Wood penned classic has charted since it attained #4 in December 1973 versus Slade's "Merry Xmas Everyone", which pipped it to the top spot that year and also remains popular to the present day.

An aborted switch of labels from Harvest (HAR5079) to Warner Bros. (K16336) for "I Wish It Could be Christmas Everyday" b/w "Rob Roy's Nightmare (A Bit More H.A.)" meant that the Wizzard single had much less time to build up a head of steam than Slade's tune hence its final position of #4 was all the more remarkable. Yet (as shown above) whenever both records have re-entered the singles chart together thereafter, the Wizzard track has managed a higher placing than the Slade song ten (10) out of eleven (11) times.

Yours Truly KJS will (obviously) always prefer "I Wish It Could Be Christmas Everyday". Both songs are perennial faves, equally loved by many and not necessarily in competition with each other. If nothing else, the inclusion of downloads and streamed content within the Official UK Singles Chart since 2006 has given Roy Wood and Wizzard the edge in terms of chart performance.

Labels: elobeatlesforever, elobf, I Wish It Could Be Christmas Every Day, Merry Xmas Everybody, Roy Wood, Slade, Wizzard