ELO Hall of Fame Poser: Who Might Be There? 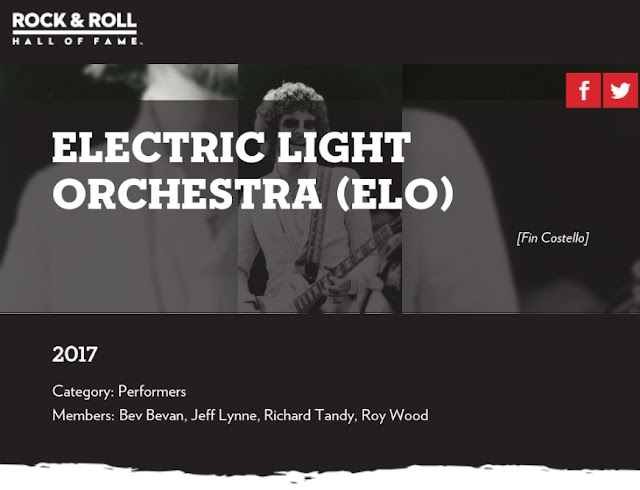 #1,215: Hello ... Hello ... my old friends ... It's great to see you once again! The welcome news that the Electric Light Orchestra (ELO) are to be inducted in the Rock & Roll Hall Of Fame Class of 2017 has sparked speculation amongst fans, media and even the band members themselves as to just who will turn up at the ceremony in Brooklyn on Friday 7th April next year being as (rightly or wrongly) only Bev Bevan, Jeff Lynne, Richard Tandy and Roy Wood are cited as band members.

Co-founder and drummer Bev Bevan has already given interviews to both The Birmingham Mail and Rolling Stone (here) in which he is clearly delighted to be named as one of the inductees whilst also clearly stating his opinion that Roy Wood should be there too and that a reconciliation might be forged with Jeff Lynne too. Roy has not made a public statement (at the time of writing) as to his intentions, bur it appears that all options are open at present. The view of Yours Truly KJS is that ideally all four ELO personalities should attend and dispense with any longstanding disagreements - and that would tick all the boxes for the fans who have played such a large part in the induction process by voting in their tens of thousands. Having said that, the opinion of elobeatlesforever (elobf) is that Jeff and Richard are the most likely to attend with Roy a distinct possibility too, remembering that his close family resides in the NYC area too. The unknown factor is whether Jeff and Roy will accept the olive branch seemingly being offered by Bev - a possibility if it were brokered by their mutual friend Jasper Carrott.
This particular writer has been a fan of ELO, The Move, Roy Wood and the exploits of both core personalities and extended members for almost 40 years, the thought of even a temporary agreement that leads to all four named members being together on the same stage again for a few magical moments would be far more than an Ordinary Dream.