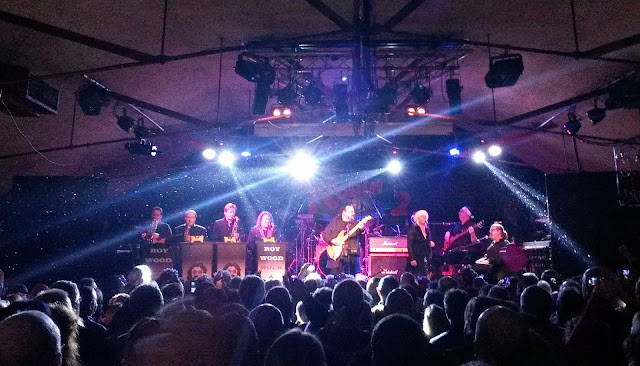 #1,207: Hello ... Hello ... my old friends ... It's great to see you once again! Roy Wood triumphantly rocked 'n' rolled into Bilston with his band and proceeded to dazzle the full house at The Robin 2 for his annual pre-Christmas bash last night (Thursday 8th December) with another superb performance that bore the hallmarks and fruit of his largest series of UK dates for many years.

The Wizzard who has also given us The Move and ELO arrived on stage just after 10PM and delivered an entertaining fourteen song set, much to the delight of the assembled mutual appreciation society, that covered all the bases with his iconic bestsellers mingled in with his now familiar, recent tunes and the bostin' instrumental "Roy's Revenge". Once again, the arrival of Woody on stage drew huge cheers from his 700+ fans and admirers as he launched into "California Man". The band were in fine fettle and looked relaxed throughout, adding to the fantastic atmosphere at the venue on the night.
If the brass and sax tinged classics "See My Baby Jive", "Ball Park Incident", "Fire Brigade", "Angel Fingers (A Teen Ballad)" and "I Can Hear The Grass Grow" didn't tick all the boxes, then the sight of a certain multi-instrumentalist, songwriter, musician, producer, singer and innovator manhandling his bagpipes for an extended demonstration during "Are You Ready To Rock?" most surely did! And, as the man himself said, how could the night not end with another blast of what Yours Truly KJS still considers the most superlative of Christmas songs in the week that it re-entered the Official UK Singles Chart Top 40?
The Roy Wood Rock & Roll Band performed: "California Man" ~ "Ball Park Incident" - "Kiss Me Goodnight, Boadicea" ~ "Fire Brigade" ~ "Big Girls Blues" ~ "New York City" ~ "I Can Hear The Grass Grow" ~ "Angel Fingers (A Teen Ballad)" ~ "Roy's Revenge" ~ "Are You Ready To Rock?" ~ "See My Baby Jive" ~ "Flowers In The Rain" ~ "Blackberry Way" ~ "I Wish It Could Be Christmas Everyday" 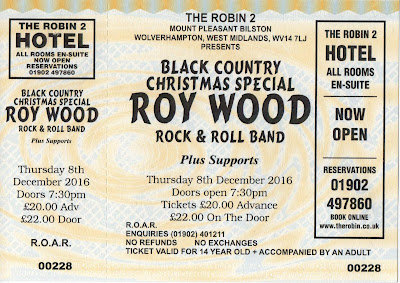 Don't forget that you can catch Roy with his guests Andy Fairweather Low & The Low Riders, Chas & Dave and The Enigma Strings at Birmingham Symphony Hall on Tuesday 20th December for his Rockmas 2016 spectacular. Tickets are priced from £32.50 each and can be purchased from: www.thsh.co.uk/event/roy-woods-rockmas-2016

Find out what Dr. Roy Wood is up to via these links thus:

elobeatlesforever (elobf) recommends Roy Wood to those enlightened folks who enjoy the music of ELO/Jeff Lynne, Wizzard, The Move, The Idle Race, 'Brum Beat', The Beatles and related artistes.