#1,214: Hello ... Hello ... my old friends ... It's great to see you once again! After much anticipation, Roy Wood duly rock 'n' rolled his Rockmas 2016 spectacle into Birmingham earlier this week and, with a little help from his friends, delivered another night of musical magic in front of over 2,000 festive fans in the iconic Symphony Hall on the night of Tuesday 20th December. Enjoined again by Andy Fairweather Low & The Low Riders, Chas & Dave and The Enigma Strings, the man who brought us The Move, ELO and, of course, Wizzard, also gave a debut to comedian and classically trained pianist Kev Orkian.
As ever, Andy Fairweather Low - with Wizzard saxophonist Nick Pentelow in tow - enthralled the assembled throng with an energised mixture of his own classics including "High In the Sky", "If I Ever Get Lucky", "Bend Me Shape Me", "Wide Eyed And Legless" and "If Paradise (Is Half As Nice)" as well as such inspired covers such as "(Get Your Kicks On) Route 66", "Tequila", "Peter Gunn", "Apache", "Route 66", "Puttin' On The Style" and, quite aptly, "Blue Christmas".
Kev Orkian was a revelation. In fifteen minutes, the Armenian comic won the audience over with some fine Woody tinged comedy, a rendition of Elton John's "I'm Still Standing" in CD skip mode and an exploration of what the song "Happy Birthday" would sound like if it were composed by the likes of Chopin, Beethoven, Tchaikovsky and even Andrew Lloyd-Webber. Very original, very funny and certainly one to watch.
When Roy Wood arrives on stage, you sit (or stand) up and take notice. You have a good idea as to the content of the set list yet, in every case, you are taken on a familiar musical journey through what is only a small portion of his published output yet you are left quite refreshed and amazed at the end of the evening as to the sheer legacy of one of the finest all round musicians ever produced by the UK. The man they call Woody is clearly very contented and happy with the Rock 'n' Roll Band who have traversed the country with him on gigging duty for the last three months and in recent years. And it showed with and the brass quartet and rhythm section combining superbly to add a jazz finesse to the songs we all know and love. The hits were all there from The Move and Wizzard alongside the more recent "Kiss Me Goodnight, Boadicea" (soon to be covered by none other than Cheap Trick, hopefully) and "New York City", not forgetting the wonderful sight (and sound) of the bagpipes and marching band who accompanied Roy during "Are You Ready To Rock?"

Chas & Dave then joined the festivities in a four song cameo that included the classy "Ain't No Pleasing You" amongst their more familiar Rockney tunes to liven up the proceedings further before The Enigma Strings octet and Dr. Roy Wood continued the hit fest with my fave moments of the evening, an orchestrated "Flowers In The Rain" and "Blackberry Way" followed by a certain Christmas classic to round off an enjoyable and completely satisfying night whilst "I Wish It Could Be Christmas Everyday" is once again nestled in the UK Top 30 Singles Midweek Chart and Roy's ELO brainchild is all set to be inducted into the Rock & Roll Hall Of Fame in a few months time. Find out more about Roy's live dates next year via this link thus: Roy Wood: Ringing in the New Year Dates 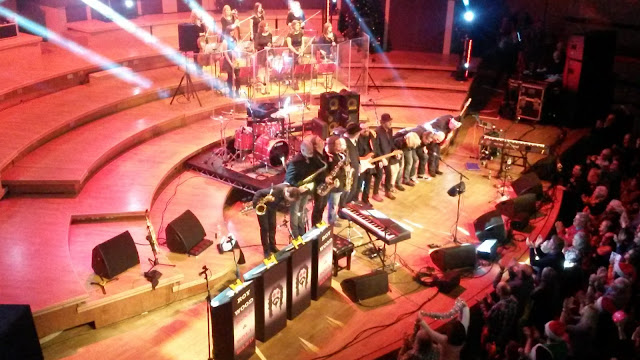 elobeatlesforever (elobf) recommends Roy Wood to those enlightened folks who enjoy the music of ELO/Jeff Lynne, Wizzard, The Move, 'Brum Beat', The Beatles and related artistes.