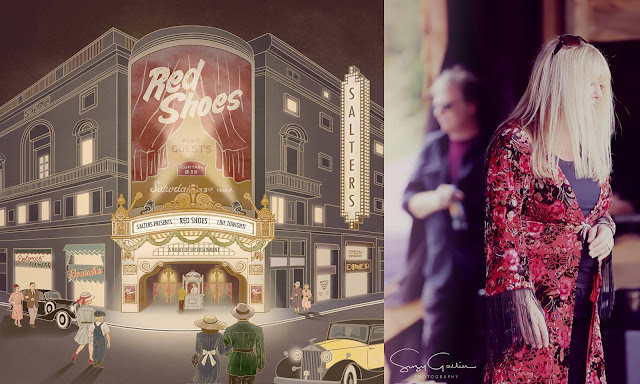 #1,190: Hello ... Hello ... my old friends ... It's great to see you once again! Following on from their critically acclaimed first two albums "Ring Around The Land" (2010) and "All The Good Friends" (2012), elobeatlesforever (elobf) featured artiste Red Shoes have launched a new Crowdfunder campaign, as of Saturday 5th November, with the noble goal of funding their third studio album by Friday 30th December - which just happens to also be Jeff Lynne's 69th birthday!

Red Shoes included a glorious folk tinged cover of Roy Wood's classic song "Blackberry Way" (The Move; #1; February 1969) on their second album "All The Good Friends" with a little help from Bev Bevan. Tony Kelsey (Quill; Bev Bevan's Move/Zing Band) is also a former member. At the time of writing, 14% of their goal has already been pledged with 54 days to go. Full details of this exciting project - which has an anticipated album release date of Spring 2017 - are detailed within their Crowdfunder campaign page via this link thus:

The core trio of Red Shoes singer/songwriters and co-founders Mark and Carolyn Evans alongside guitarist Nigel King. You can find out about more about Red Shoes, their current gig schedule and previous albums via their official web site thus: