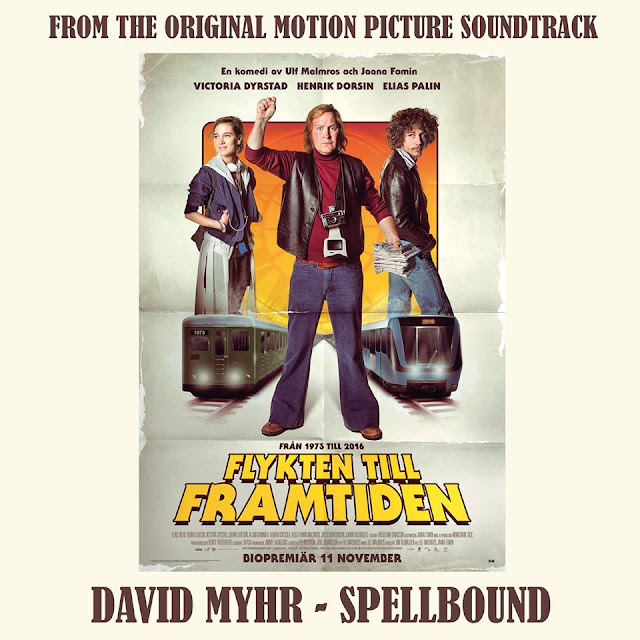 #1,179: Hello ... Hello ... my old friends ... It's great to see you once again! "Flykten Till Framtiden" - English title: "My Future Love" - will hit cinemas in Sweden on Friday 11th November. The feature-length film is directed by Ulf Malmros and Jaana Fomin and stars Henrik Dorsin, Elias Palin, Victoria Dyrstad and Johan Ulveson in a time-travel themed adventure, partially set in 1973. The OST for the film has been overseen by composer Jimmy Lagnefors with a brief to create a soundtrack authentic to that period. So when the directors specifically requested a song that "sounds like Electric Light Orchestra", elobf recommended singer/songwriter David Myhr was brought in to collaborate.

Myhr, with his background in 90’s power pop combo The Merrymakers and, in particular, his 2012 album "Soundshine" (LoJinx), has demonstrated a knack for creating fresh, modern, pop music with roots firmly in the classic tradition of Paul McCartney and Jeff Lynne. Hence it was no surprise that Myhr jumped at the chance. Lagnefors and Myhr were also behind the song "Vänta Inte På Mig" ("Don’t Wait For Me") in the 2015 Swedish box office smash "Micke & Veronica" and with new song "Spellbound", the songwriting duo have managed to create "the song that ELO never made". "Spellbound" features heavily in the film and plays when the credits roll.

Yours Truly KJS has been privy to this superb song for the last few days and thinks that "Spellbound" by David Myhr will most certainly to appeal to fans of Jeff Lynne and the classic ELO sound. In an interview with the acclaimed Swedish musician earlier this week, I asked David a few questions about "Spellbound" in this interview for elobeatlesforever (elobf) thus:

KJS: How did David Myhr and Jimmy Lagnefors cross paths?
DM: Jimmy and I are both musicians and we live in the same part of Stockholm (Södermalm) and we hang out at the same little bar called Noel's. Many years ago he was responsible for booking artistes to a small venue and that was where I first met him. He talked fondly of The Merrymakers and that doesn’t happen very often here in Sweden. So obviously I instantly took a liking to him! In recent years we’ve been socialising quite a lot and we love to sit and have something to drink, play guitars, talk about music in general and songwriting, Paul McCartney and Jeff Lynne in particular. He’s a very creative and productive guy. It’s always an honour for me when he suggests the two of us working together!
KJS: With a brief to write a song that “sounds like Electric light Orchestra”, did you have an idea of the sound you wanted to achieve?
DM: Well, the brief actually was to sound "like ELO in 1973” and I did some homework going through some deep cuts. But the period both Jimmy and I are most fond of is when the really big hits started to come, around 1975-1977. And, personally I also have the "Time" album as a big favourite 'despite' all the synthesisers. But I think we had a mutual understanding of what we wanted to do.
KJS: Were there specific ELO tracks and/or Jeff Lynne compositions that inspired you?
DM: Yes, indeed! And that was what really helped us. We agreed on letting us be inspired (and very much shamelessly so!) by "Livin’ Thing". I’ve always loved that song so much. Not only the chorus, but the verse! I just love everything about it. The way Jeff sings. The beautiful ascending melody supported by those simple but still surprising and fresh-sounding chords. Anyone with some music theory knowledge knows that C and Am are very much related and predictable. But it’s when they’re followed by Ab to Fm - that does it for me! Those two chords have the same relation to each other but in another key. And as if it wasn’t enough, then comes a beautiful Em. Even Jeff himself has said in an interview that it’s the chord that "makes the whole song". Music nerd stuff, I know. But that’s what we are. And Jeff as well!
KJS: How did you and Jimmy go about writing and arranging the song?
DM: Basically we nicked just about everything about the production from "Livin’ Thing". The instrumentation, the groove, the beat, the tempo, the vibe, the style, the way the parts are played. Also, we tried to emulate the parts sound-wise. For instance I multi-tracked a bunch of six and twelve string acoustic guitars to get that thick layer of acoustic guitars that I often associate with Jeff Lynne’s stuff. All that is just production tricks and they are up for grabs. Nobody can copyright a chord sequence or a groove. And actually that’s a quite common trick among professional songwriters to nick production aspects of successful songs. The Beatles took the riff style and groove of "Watch Your Step" by Bobby Parker as an inspiration for "I Feel Fine". And Bobby Parker in his turn got the groove from "What’d I Say" by Ray Charles. So it’s a nice old tradition. Pop music is born out of pop music and "Spellbound" is born out of "Livin’ Thing". But having said that, the melody and the lyrics are brand new and, hopefully, unique. We hope they have a certain Lynnesque and ELOesque 'vibe'. That's the tricky part! Because you’re not allowed to steal melodies. Jeff wouldn’t forgive us for that. But I do hope he gets to hear our song one day and smile at the obvious tribute it is. It’s on my bucket list to meet him one day so I hope we don’t upset him too much.

KJS: It must be a tremendous honour to have “Spellbound” featured throughout the new film.
DM: Yes, for me as a songwriter, who always have been somewhat "under the radar", not least here in Sweden, when it comes to media exposure, it’s a very cool thing to hear one's own song blasting out in the cinema at the end of the movie. For Jimmy, it’s just another day at work since his job is to be a film music composer. So I really appreciate his generosity in that he invites me to be part of this. It’s actually not the first time. I co-wrote two songs with him for a movie in 2014 called "Micke & Veronica" which was a really successful movie. For that we wrote another early 70’s sounding song called "Vänta inte på mig". That, by the way, was the first time, and possibly last, that I sang in Swedish!
KJS: What are your hopes for “Spellbound”?
DM: My hope is that those who see the film instantly goes home and google this unknown guy called David Myhr and that they fall in love with my music, and the music of The Merrymakers, and that this means that people start to come in big numbers to my concerts and that the song will be played on the radio all the time and that Jeff Lynne will call me and suggest producing my next record. However, I’ve been in this business for too many years to actually except any of that to happen. Of course, as usual, nobody will care. Three more likes on Facebook, maybe. A few hundred spins on Spotify that will, at best, pay me a cappuccino at Starbucks. Do I sound bitter? No, no! That was years ago when I was bitter. Now I only do it from sheer passion! And can anything make me happier than to make some three minute pop songs in a Jeff Lynne vain. Probably not. Well, except for my wife and cat of course! Another hope I have is that the song will have a life outside and after this movie. After all the movie is mainly a Swedish affair. But I figure it’s too much of a pastiche to put on my own album. Anyway, the song’s out there now - let’s see if it gets wings.
KJS: What was the reaction of film directors Ulf Malmros and Jaana Fomin when they heard it?
DM: The rumour is that at least Ulf Malmros loves it! And he is known to be a big fan of ELO so I couldn’t be happier about that. And at the pre-screening for the film crew he actually came up to me and said "great vocals" so that felt very good as well. At the moment I was a bit shaken though because in the credits that just had rolled by it had said "performed by Daniel Myhr". Daniel? A very Spinal Tap moment! But according to the rumour, that should be fixed by now!

KJS: Could we see David Myhr writing more film scores with Jimmy Lagnefors in future?
DM: Sometimes I think Jimmy gets a bit scared about how obsessed I get with the production and recording of my songs so I’m sure he’ll think twice. But I sure do have my fingers crossed! It’s too much fun!
KJS: Is it your ambition to write film scores and is your second solo album on the way?
DM: I don’t know about film scores. There are so many talented people in that area. Jimmy is one of them. But to contribute with pop songs for other movies would be a dream! The first time for me was when The Merrrymakers had a song in the American movie "Love & Sex" with Jon Favreau in the leading role. That was a very cool thing. He’s such a big shot now. I wish he would call me now and ask for a song for any of his upcoming projects. As for a second solo album, the answer is actually yes! I’m very excited to finally be able to say that the recordings have started. It’s going to be an album full of songs on which I have collaborated with bunch of great songwriters. There’s a blog post at my web page www.davidmyhr.com about it with a bunch of video blogs from the recordings that took place a month ago in Nashville. With Brad Jones as a producer. Exciting times. I hope it will be out next year!

The download single is released in Sweden and the rest of Europe, today - Friday 14th October - via LoJinx and can be purchased via these links thus:

elobeatlesforever (elobf) recommends "Spellbound" by David Myhr to those enlightened folks who enjoy the music of ELO & Jeff Lynne, The Move, Roy Wood, The Idle Race, 'Brum Beat', The Beatles and related artists.