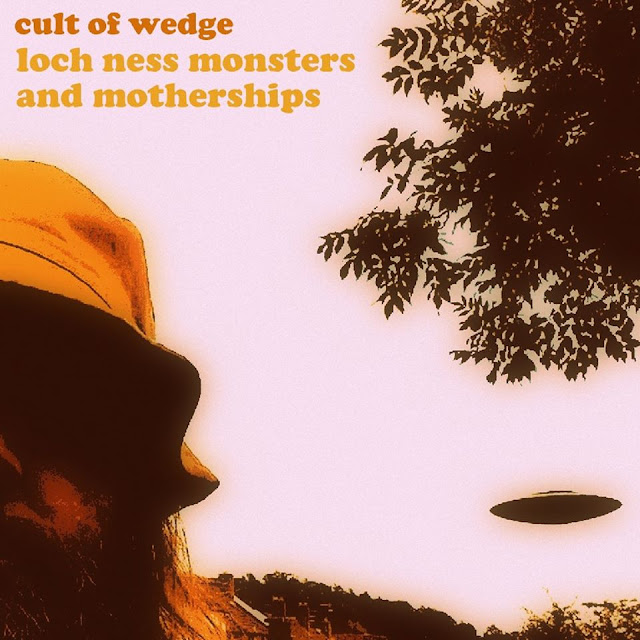 #1,172: Hello ... Hello ... my old friends ... It's great to see you once again! You have to give it to Pete Hackett. The Rowley Regis based singer, songwriter and multi-instrumentalist has previously delivered some impressive albums with such memorable titles as "Tape Recorders Changed Everything", "A Selection Of British Sea Songs" and "Another Ten Songs About Death, Hurt And Misery" via the musical vehicle that is (also) curiously named Cult of Wedge.

"Loch Ness Monsters And Motherships" - their sixth studio album - is released later this week and is yet another commendable collection of clever and witty lyrics bundled with some exceptional tunes. This is certainly the most commercially appealing recording that Pete Hackett has put out to date yet it retains the charm and nuances of its predecessors. The ten songs are instantly likeable, replete with some top notch guitar work and synth touches. From opener "That Song Last Summer" through to final track "Lovers Lane", there is a lovely retro feel to this album with fond recollections and reminiscences of days past and plenty of references to the local landscape.

There plenty of styles to be found here with the pure power pop of "When I Was Young" (Pete told me recently that this song was written as "a polar opposite" to "When I Was A Boy") mingled nicely with the sublime "Miss America" having a classy Americana tinged country feel to it and the words: "She's got Skynyrd and The Eagles on the radio" throughout. "Oh Lindsay" is a lovely sentimental look back to 1979, affectionately remembering "buying Spangles from the corner shop" et al. "Wish Ourselves Away" has a nice acoustic feel to it whilst "Shine On Me" is another feel good anthem in the making, with a succinct Blues touch to it. Yet, in amongst all these guitar driven gems is "Conspiracy Girl", a moody, pulsating song with a smooth drum and bass vibe to it, adding another dimension an album that is another example of the unsung local talent who is Pete Hackett a.k.a. Cult of Wedge. Yours Truly KJS has no hesitation in suggesting that you invest the £4.99 asking price and join me in enthusing over this well crafted LP. (9/10)

"Loch Ness Monsters And Motherships" by Cult of Wedge is released on Friday 30th September and can be ordered in download format via this link thus:


elobeatlesforever (elobf) recommends "Loch Ness Monsters And Motherships" by Cult of Wedge to those enlightened folks who enjoy the music of ELO/Jeff Lynne, Roy Wood, The Move, The Idle Race, 'Brum Beat', The Beatles and related artistes.