#1,168: Hello ... Hello ... my old friends ... It's great to see you once again! When Bev Bevan announced back in July that the UK tour dates originally slated for The Move ft. Bev and Trevor Burton in October/November had been cancelled and replaced by selected Midlands dates by Bev Bevan's Zing Band, it was a huge relief to Yours Truly KJS that their gig at The Prince of Wales Theatre in Cannock on the night of Sunday 18th September had been retained. The anticipation of seeing The Move and ELO co-founder perform live for the first time in 2016 was enhanced by the rave reviews and recommendations for support act Ricky Cool & The In Crowd hence a superb evening of entertainment was guaranteed.

And so it was as Ricky Cool and his amazing, energetic sextet wowed the audience with a superb 45 minute set which included the title track from their new album "Flamingo Nights", fantastic covers of "Keep On Running" and "The Good, The Bad and The Ugly", the intriguingly entitled "The Coconut Question", "Watch Your Step" and "Time Is Tight". Visit their official web site and/or go see 'em folks!
After we had caught our breath in the ensuing interval, it was the turn of Bev Bevan's Zing Band to make their appearance on stage. The 'new' quintet featured the familiar faces of Phil Tree, Tony Kelsey, Abby Brant alongside guest lead vocalist Geoff Turton and those assembled were taken on a musical journey that took in the careers of both Bev and former Rockin' Berries star Geoff, with one or three surprises thrown in for good measure. One would have expected to hear some Roy Wood penned Move classics, some sixties covers - a la the Made In Brum and Stand Up & Rock! theatre shows - and, of course the odd glorious ELO tune - but it was the inclusion of Black Sabbath and Argent classics "Heaven And Hell", "Paranoid" and "Hold Your Head Up" which ensured a pleasant surprise for this writer and many more, especially when you consider that the likes of Roy Orbison and The Beatles were also represented in a set that was, in fact, cohesive and balanced. Add to that the wonderful humour of Geoff Turton as well as the career recollections of the drummer once nicknamed 'Basher' and 'Bullfrog' and you have a great show. Mention also must needs be made for the contributions of stalwart bassist/co-vocalist Phil, guitar wizard Tony and the sublime voice of keyboard queen Abby.

If it is indeed true that The Move have now moved on, then this latest project for Bev Bevan has all the elements required to ensure future success for this most distinguished of legendary percussionists.
Bev Bevan's Zing Band performed: "I Can Hear The Grass Grow" ~ "Fire Brigade" ~ "A Hard Day's Night" ~ "I Wanna Hold Your Hand" ~ "When You Walk In The Room" ~ "Piece Of My Heart" ~ "Hold Me" ~ "He's In Town" ~ "You've Lost That Loving Feeling" ~ "Can't Find My Way Home" ~ "Heaven And Hell" ~ "Paranoid" ~ "Hold Your Head Up" ~ "Running Scared" ~ "Mercury Blues" ~ "California Man" ~ "Blackberry Way" ~ "Mr. Blue Sky" ~ "Don't Bring Me Down" ~ "Gimme Some Lovin'"
You can still catch Bev Bevan's Zing Band live in 2016 at these two (2) shows thus: 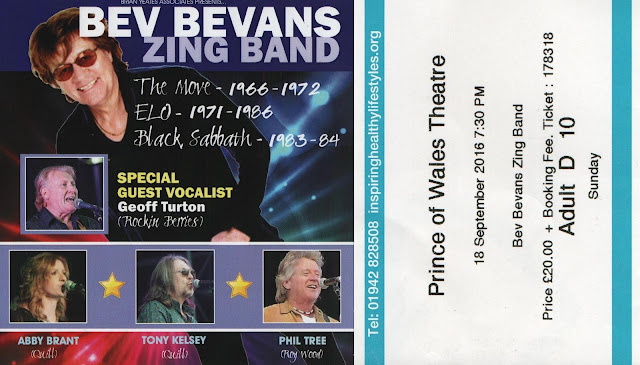 elobeatlesforever (elobf) recommends both Bev Bevan's Zing Band and Ricky Cool & The In Crowd to those enlightened folks who enjoy the music of ELO/Jeff Lynne, Roy Wood, The Move, The Idle Race, 'Brum Beat', The Beatles and related artistes.