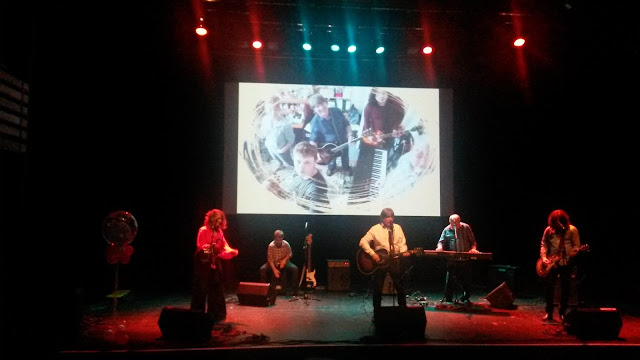 #1,170: Hello ... Hello ... my old friends ... It's great to see you once again! Time really does fly these days. It's now just over a year since Yours Truly KJS ventured over to Birmingham to see Morganisation make their live debut. Fast forwarding to 2016, the opportunity to go see Dave Scott-Morgan's lively quintet perform at the homely Artrix Theatre in Bromsgrove last night (Friday 23rd September) - was certainly one not to be missed.
But first, mention must needs be made of the wonderful support provided by Indica Campbell - daughter, of course, of UB40's Ali. The talented songstress - more than ably assisted on stage by guitarist and cohort Stuart Toogood - delivered an impressive roster of songs comprising original compositions such as "I Can Never Love You Again" and "I'm Just Me" alongside covers of Nine Inch Nail's "Hurt" and the Amy Winehouse anthem "Valerie". This was a confident and astute performance by Indica, promising much for the future. Definitely one to watch!
In a word or three, Morganisation were fantastic! Dave Scott-Morgan has managed to fashion an entertaining and talented band alongside wife Mandy, judging by the quality of this multi-media, anecdote and music filled show. In fact, it is more accurate to describe Morganisation as a family unit rather than simply as a band. Family in the sense of their roots in 'Brum Beat' history and family in the sense of the way they interacted and came across to the healthy audience. We were treated to a balanced set of fifteen songs which not only paid homage to DSM's own musical heroes in Buddy Holly, The Beatles and Bob Dylan but also managed to include a suitable proportion of Jeff Lynne penned ELO classics as well as some Morganisation gems of their own. Two songs from 2012's classy "Across The Divide" plus a quartet of tracks from new album "Bubbles" - due a full release on Saturday 26th November - meant that all the bases were covered in show that literally was over too soon. The intricate guitar craft of Alex Lowe again caught the eye, blending nicely with the impressive percussion of Jack Rosa and keyboard antics of Alan Smith. Dave and Mandy are really and truly a couple and they manage to convey that beautifully within their recollections, onstage discourse and musicianship. I can't pick a fave because they were all fab!

Fans of ELO/Jeff Lynne should also pay attention to Morganisation, both when they can be caught live and from their recorded output. We do indeed look forward to "Bubbles" and, if you can't wait a couple of months, why not purchase the seven (7) pre-release tracks here to whet your appetite?
Morganisation performed: "Benediction" ~ "Love's Made A Fool Of You" (Buddy Holly) ~ "That's What They Say" (Buddy Holly) ~ "Every Little Thing" (The Beatles) ~ "Telephone Line" (ELO) ~ "Ball & Chain" ~ "All You Need Is Love" (The Beatles) ~ "Black Dog Day" ~ "Knower" ~ "Don't Think Twice" (Bob Dylan) ~ "Are You Ready" ~ "Gibraltar Farm" ~ "Mission Impossible" ~ "Mr. Blue Sky" (ELO) ~ "Rock 'n' Roll Is King" (ELO)
Morganisation are: Dave Scott-Morgan (Lead vox/guitars) ~ Mandy Scott-Morgan (Vox/percussion) ~ Alan Smith (Keyboards/backing vox) ~ Alex Lowe (Guitars/backing vox) ~ Jack Rosa (Bass/Cajón)

You can find out more about Morganisation, their new album "Bubbles" and those forthcoming gigs via their official web site thus:

elobeatlesforever (elobf) recommends Morganisation and Indica Campbell to those enlightened folks who enjoy the music of ELO/Jeff Lynne, Roy Wood, The Move, The Idle Race, 'Brum Beat', The Beatles and related artistes.