ChartWatch: All Over The World Hits New High 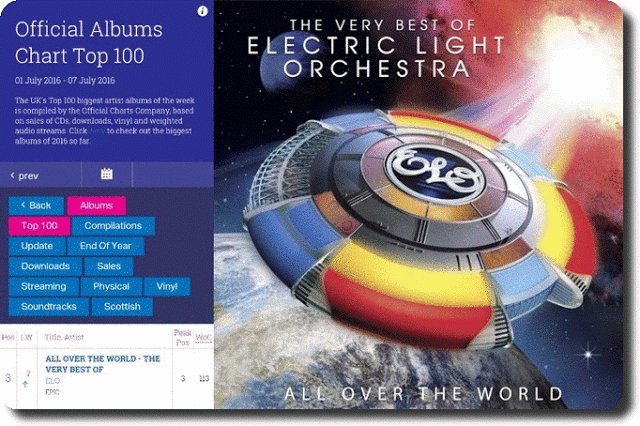 #1,138: Hello ... Hello ... my old friends ... It's great to see you once again! The Official Top 100 Album Chart published earlier today [Friday 1st July] confirmed that ELO's classic compilation "All Over The World" has shot back up the chart this week to reach its best-ever chart placing of #3 in the wake of those stunning June gigs in Manchester, Birmingham and, of course, Glastonbury following a successful CD relaunch and stunning 2LP vinyl debut back on Friday 10th June.
"All Over The World" was originally issued back in June 2005, reaching #6 at that time. The twenty [20] track greatest hits package is the only ELO album to peak at third place in the UK album chart [at the time of writing], has the longest chart run of any ELO album - presently 113 weeks - and has now sold over one million units.

ELO Beatles Forever [ELOBF] recommends "All Over The World" by Electric Light Orchestra  to those enlightened folks who enjoy the music of ELO, Jeff Lynne, Roy Wood, The Move, The Idle Race, 'Brum Beat', The Beatles and related artistes.