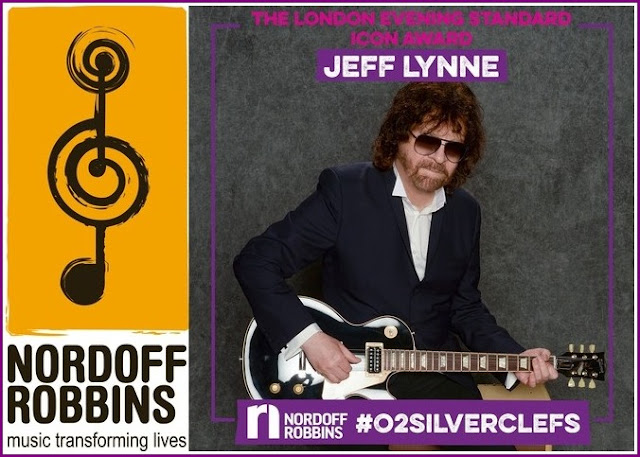 #1,110: Hello ... Hello ... my old friends ... It's great to see you once again! The much respected Nordoff-Robbins Music Therapy charity announced earlier today that The London Evening Standard Icon Award - also known as an O2 Silver Clef - will be awarded to ELO maestro Jeff Lynne on Friday 1st July 2016 at the Grosvenor House Hotel in London. In the press release, Jeff stated:

"I am thrilled to be receiving the Icon Award. There are so many people who benefit from the charity’s work and I am honoured to have been made part of it."

He was joined by Jon O’Donnell [MD of ESI Media] who added: "ESI Media, home of the The London Evening Standard, is extremely proud of its continued association with Nordoff Robbins and all the fantastic work they do. This year we're delighted to be presenting the Icon Award to a giant of the Music Industry on behalf of a giant hearted charity."
Jeff Lynne has been involved with Nordoff-Robbins Music Therapy for some time. You may remember that he produced a single in aid of the charity back in 1993 entitled: "Wonderful Land" b/w "Nivram" by Hank Marvin featuring Mark Knopfler and recorded at Abbey Road Studios.

Nordoff-Robbins Music Therapy is the largest independent music therapy charity in the UK, dedicated to changing the lives of vulnerable and isolated people. They support thousands of people through their own centres and by working in partnership with a wide range of organisations including care homes, schools and hospitals. Music therapy is the specialist use of music that aims to facilitate physical and emotional well-being, and to promote the development and retention of key communication skills. A wide range of instruments can be used in music therapy, including the voice, and the music created is often improvised. Music therapists support people to develop their own ways of being musical in order to explore their potential and connect with the world around them. Donations can be made to the charity via this link thus: www.nordoff-robbins.org.uk/donate

Yours Truly KJS and elobeatlesforever (ELOBF) wish to congratulate Jeff Lynne for this latest recognition in a long line of achievements.