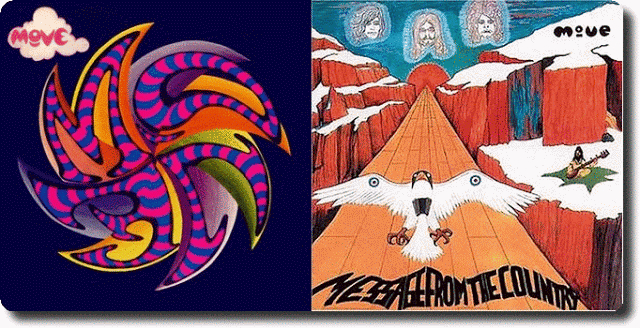 #1,121: Hello ... Hello ... my old friends ... It's great to see you once again! Fans of The Move will be pleased to hear the news that not only is their final long player "Message From The Country" to see re-release in 180g vinyl on Friday 24th June, it will now be joined just four weeks later on Friday 22nd July by "Move" - their self-titled first album, released originally in March 1968 - also in 180g vinyl and in its original mono mix, thanks to the nice people at Music On Vinyl.

The last calendar year has certainly been a great year for fans of ELO, The Move and the vinyl revolution! Pre-orders can be placed for either or both issues with amazon.co.uk via these links thus:

ELO Beatles Forever [ELOBF] recommends "Move" and "Message From The Country" by The Move to those enlightened folks who enjoy the music of ELO, Jeff Lynne, Roy Wood, The Idle Race, 'Brum Beat', The Beatles and related artistes.