#1,134: Hello ... Hello ... my old friends ... It's great to see you once again! I had to pinch myself a couple of times last night [Friday 24th June] as Yours Truly KJS settled down to see my third Jeff Lynne's ELO concert of 2016 at The Barclaycard Arena [formerly the NIA] in "Down Home Town" Birmingham. Yours Truly KJS has been blessed to see [and review] the likes of Paul McCartney, Elton John, Fleetwood Mac, Bryan Adams and Brian Wilson perform live in the last twelve months but the gigs featuring Jeff's latest ELO incarnation - two in Brum and one in Liverpool - have been, literally, out of this world. I was determined to make sure that I absorbed and fully experienced this jaw-dropping, amazing spectacle in the very centre of the ELO heartland - and so it was. JEFF LYNNE has not only assembled a tight and cohesive band, his team have also re-invented the term astounding with an audio visual light fantastic presentation that not only amplifies the ELO experience "Above The Clouds", it also elevates the audience to a "Destination Unknown". 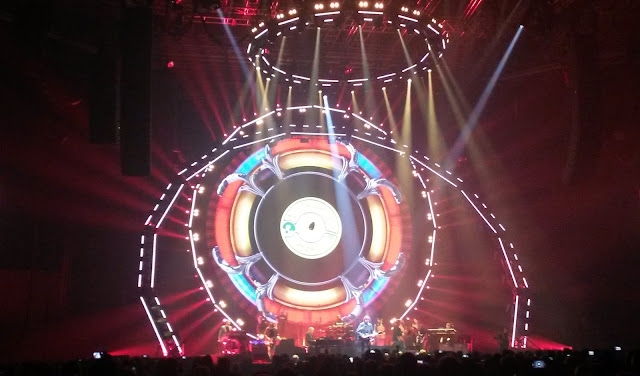 After a thoroughly impressive and completely enjoyable support set by Dublin quintet THE SHOOS, the capacity crowd was literally "Blown Away" by a nineteen [19] song set that took us right through the ELO songbook all the way from "10538 Overture" to "Secret Messages" and beyond to "Alone In The Universe". The 'new' songs unveiled on this tour - particularly "When I Was A Boy" - sit perfectly amongst the classics we all know and love. The spine tingling intro of "Tightrope" is a masterstroke, the projected imagery of "Wild West Hero" and "Turn To Stone" is superb and the presentation of "Secret Messages", "Evil Woman" and "All Over the World" [and everything else!] continues to send the fans into orbit. The stompers "Rockaria!", "Showdown" and  "Roll Over Beethoven", naturally, brought nearly all to their feet and the familiar, joyful, ultimate feel good anthem "Mr. Blue Sky" once again provided the ultimate fanfare for band and attendee alike. Make no mistake about it, this was a world class, Premier League gig of the highest order to send avid and casual ELO fan alike into raptures. We now look forward to Glastonbury and, after that, those US dates ...

Find out what Jeff Lynne's ELO are up to by visiting their official web site via this link thus: