Return to Vinyl: Message From The Country (The Move) 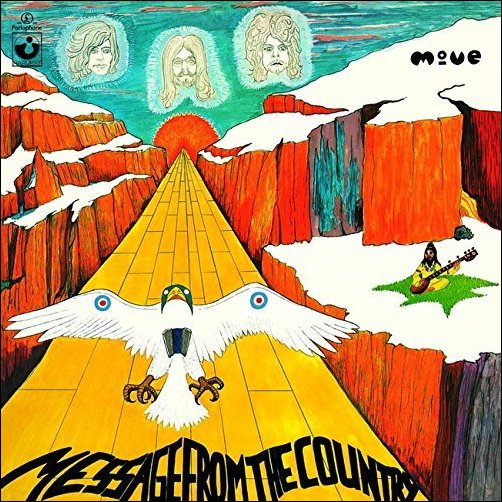 #1,114: Hello ... Hello ... my old friends ... It's great to see you once again! It looks as if "Message From The Country" is to be released in 180g black vinyl on Friday 24th June. The album - originally released in October 1971 via EMI imprint Harvest (SHSP4013) - was, of course, the fourth and final studio album by The Move and featured Roy Wood, Jeff Lynne and Bev Bevan before their formal transition into The Electric Light Orchestra (ELO).

It's unclear at present as to whether the 'new' sleeve will be a full reproduction of the original textured finish - we'll just have to wait and see. It's already been a fantastic year for fans of The Move with their back catalogue of "Move", "Shazam", "Looking On" and the "Something Else" EP all remastered and reissued complete with bonus and previously unreleased material. "Message From The Country" will be issued in 180g black vinyl and can be currently be ordered from amazon.co.uk and Rough Trade via these links thus:

ELO Beatles Forever (ELOBF) recommends "Message From The Country" by The Move to those enlightened folks who enjoy the music of ELO/Jeff Lynne, Roy Wood, 'Brum Beat', The Beatles and related artistes.