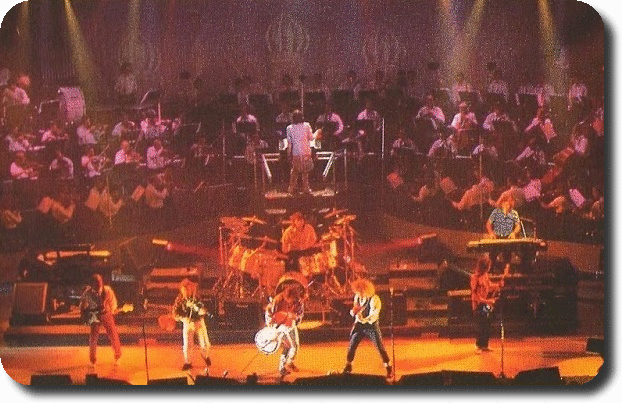 #1,113: Hello ... Hello ... my old friends ... It's great to see you once again! Having just attended my first ELO concert featuring Jeff Lynne in Liverpool last month as well as also recalling that the first ever record that Yours Truly KJS ever bought was "Turn To Stone" back in November 1977, I got to thinking recently about the first time that I ever heard the music of the Electric Light Orchestra (ELO) performed live.

I was too young to see the "Time" tour back in the day. I also missed ELO's 1986 dates too and those OrKestra gigs in 1988 for different reasons so you'll probably be surprised to find out that my very first gig of ELO music was at the NEC in Birmingham on Tuesday 28th May 1991 when Bev Bevan's Electric Light Orchestra Part Two teamed up with the Moscow Symphony Orchestra to deliver an amazing, string laden show comprising the hits of ELO as well as new material from their debut album. I still fondly remember the expectation and thrill of experiencing the music of Jeff Lynne [and a certain Brummie band who had first gotten my attention as a ten year old some fourteen years earlier] in the flesh, having travelled up from my then home in Weston-super-Mare.
Since then, I've seen and heard the music of ELO performed what must now be hundreds of times by a plethora of musicians, bands and artistes in multiple venues. Yet you always remember the first time. I'll never forget my first ELO record, my first ELO live and my first Jeff Lynne's ELO gig.PLEASE NOTE: This article is not intended by any means to be controversial. In the personal opinion of this writer - whether you liked or accepted the notion of ELO Part II or not - they did a great job in keeping the music of ELO live throughout the nineties when Jeff was minded otherwise. I will further address this subject in a forthcoming KJS article for ELO Beatles Forever (ELOBF).