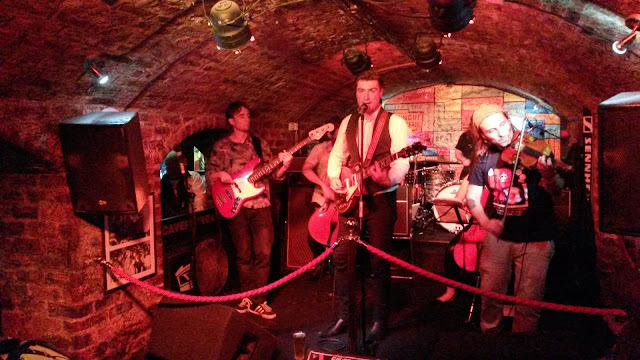 #1,118: Hello ... Hello ... my old friends ... It's great to see you once again! This was a gig long looked forward to by Yours Truly KJS. A chance to finally see The 286 perform live courtesy of their now regular appearance during the International Pop Overthrow [IPO] festival at The Cavern Club in Liverpool yesterday [Sunday 22nd May] in front of a packed and vibrant house.

ELO Beatles Forever [ELOBF] have long been an enthusiastic supporter of what leader and founder Spencer Hannabuss is trying to achieve with The 286 and, on the evidence of this seven song performance, his orchestrated septet are well and truly on their way. It really was a case of Miracle On Mathew Street as to how the band [and their instruments] managed to fit on the nine foot square stage yet it was no handicap to them as they launched into their Move influenced opener "Hello" and then the first of their new material with "Illusion". The wonderful, superbly ELOesque "Let The Rain Fall Down" came next, completely captivating those in attendance before we were introduced to "Inside Out" - another new 'un - and after that, as ever, the sublime "Miracle On 286th Street" before the final first listen of the evening to "Walk In The Sky" before the explosive if not quite superb closing number "Little Louisa".

Just seven songs - three from their forthcoming debut album and four from their two excellent EP's to date - yet they left an amazing impression with their fusion of rock 'n' roll and the classical.I loved seeing and hearing those diving cellos and the vibrant violin alongside the tight rhythm section. The 286 were not trying to be early ELO, they were being themselves, adapting their musical influences and moulding them into a stringed rock ensemble fit for their generation. The 286 give you a real taste of what ELO were [and are about] here in 2016. If the early years of ELO were labelled experimental and progressive, then The 286 are worthy to be termed experiential and impressive. Their new album can't come quickly enough and neither can their next gig. Go see 'em folks!

Find out more about The 286, where they are playing and what they are up to via these links thus:
www.the286.co.uk
the286.bandcamp.com   www.facebook.com/the286   twitter.com/The286

ELO Beatles Forever [ELOBF] recommends The 286 to those enlightened folks who enjoy the music of ELO, Jeff Lynne, Roy Wood, The Move, The Idle Race, The Beatles, 'Brum Beat' and related artistes.