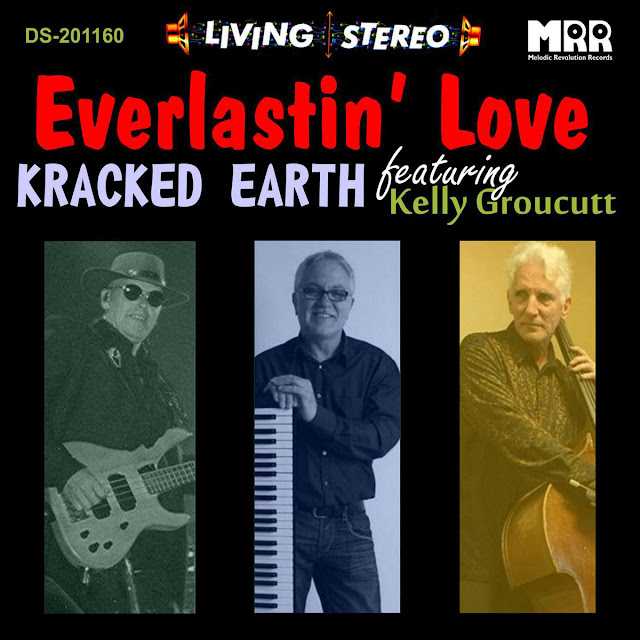 #1,106: Hello ... Hello ... my old friends ... It's great to see you once again! Andy Kinch is the mastermind behind Kracked Earth - a band whose excellent album "Splash" was reviewed by ELO Beatles Forever (ELOBF) back in 2012 here. His solo album "Andy's Diner" was released back in 1998 and on that album was a collaboration with the late, great Kelly Groucutt entitled "Everlastin' Love" which Andy has now stripped down and re-recorded with a little help from Don Schiff and the beautifully preserved vocals of Kelly. Yours Truly KJS called Andy earlier today to chat about this new Kracked Earth track and asked him for the story behind his forthcoming single thus:

"Back in 1997, when I recorded my album "Andy's Diner", I'd written this little song that had a Mavericks and ELO vibe to it but no-one to sing it. Step forward my little brother Martin who reckoned that he might be able to persuade ELO's Kelly Groucutt to sing it. Well, sing it he did - beautifully! Unfortunately, we were compromised by limited recording resources back in the day and my keyboard setup really wasn't up to delivering authentic sounding string parts. But, the final mix was as good as we could do at the time. Tragically, 2009 saw the sudden and tragic death of Kelly leaving those who knew him - and his fans throughout the world - to come to terms with his loss. Fast forwarding to 2012, I had the pleasure of working via the internet with NS stick player extraordinaire Don Schiff on our Kracked Earth album "Splash". It occurred to me recently that if Kelly were still with us, we could re-record the song in the way that I originally intended, being as Don is a one man string section! Besides bass, he also plays cello, viola, and mandolin! Add a dash of the Mellotron, violins and brass and we had a new backing track. The advancement in technology has now allowed me to isolate Kelly's original vocal from that 1997 session and fully integrate it into this new, updated version. I hope you enjoy "Everlastin' Love" 2016!" ~ Andy Kinch, April 2016

"Everlastin' Love" by Kracked Earth ft. Kelly Groucutt will be released via Melodic Revolution Records (MRR #DS-201160) on Thursday 28th April and you'll be available to buy it in digital format via this link thus: