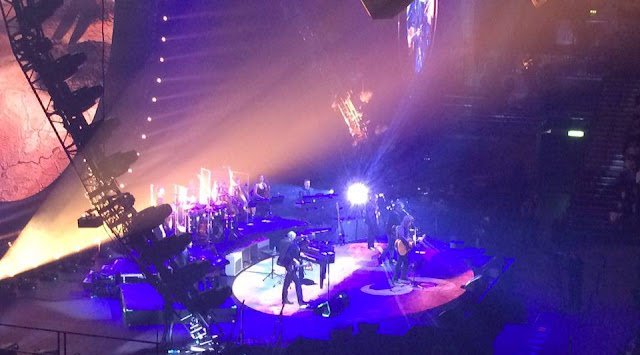 #1,090: Hello ... Hello ... my old friends ... It's great to see you once again! What started in November 1977 when Yours Truly KJS was barely ten years old finally came to fruition yesterday evening [Tuesday 5th April 2016] when a journey that began with the purchase of "Turn To Stone" - in a rather fetching 7" deep blue picture sleeve emblazoned with the legendary ELO logo - reached fulfillment in the most apt of locations for ELO Beatles Forever [ELOBF] at the impressive Echo Arena in Liverpool as I saw and heard ELO maestro Jeff Lynne with my own eyes and ears for the very first time. And what a show it was!
But firstly, mention has to be made for the polished and powerful support set by The Feeling. Featuring the likes of "Fill My Little World", "Never Be Lonely", "Spiralling", "Join With Us" and the odd track from their fifth LP, they were not overawed at all at the prospect of readying the 9,000 in attendance for the arrival of EJLO. The Feeling more than held their own, earned their applause and were a real a credit to themselves.
And then it began. The first UK arena concert in nearly thirty years for the band dubbed as the "son of Beatles" by none other than John Lennon himself made their bow in front of a packed house to rapturous if not frenzied applause as they opened with the anthemic "Tightrope" whilst the thin black curtain veil unfurled and the decades were rolled back. Their twenty song set was much too short to effectively cover both their hits, the odd album track - "Steppin' Out" was sublime - as well as material from 2015's "Alone In The Universe" long player but what we did get was a superlative audio and visual performance by Jeff's latest ELO incarnation which delighted those assembled and literally brought this writer to tears. Critics might say that there were no "Time" tracks or that there wasn't room for "Strange Magic", "Ma Ma Ma Belle" or even "One Step At A Time" but, for me, the set was as concise and compact as it could have possibly been as we were treated to three nuggets from AITU and many of those Jeff Lynne penned ELO pearls we all know and love many times over. This concert was everything I expected it to be because it had a menu to whet the appetite of every member of the ELO fan base.

The band evidenced the undoubted rehearsal and meticulous preparation Musical Director Mike Stevens with faithful lieutenant Richard Tandy continually adding his finger finesse to the proceedings. Every song was orchestrated to send the throngs into raptures - just as we expected after such a long live hiatus. When coupled with the astounding visual effects, we witnessed the long envisaged marriage between a rock band and a light orchestra birthed in the Sixties with our own eyes. The biggest crowd reaction - in my opinion - was reserved for "Turn To Stone" and the highlight of the night for me was the absolute thrill of hearing "Secret Messages" performed live by the man himself, Yours Truly KJS sobbed as I drank in this wonderful experience in the very home of The Beatles. Those of you who will get to see the remaining sold-out dates of the "Alone In the Universe" tour in the UK, Ireland, The Netherlands, Switzerland and the United States are in for a real treat! Now where did I put that handkerchief? [11/10] 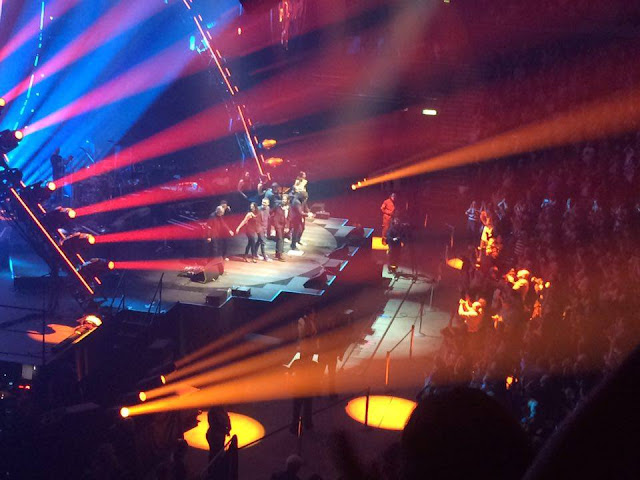 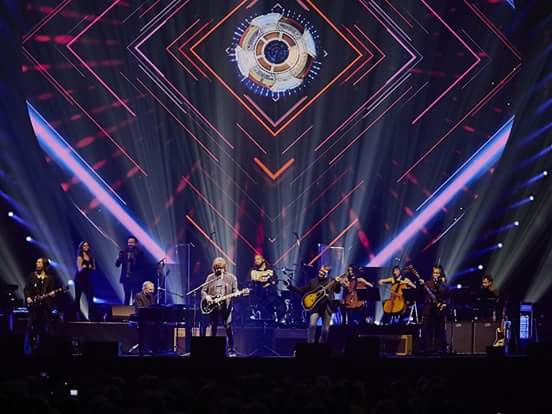 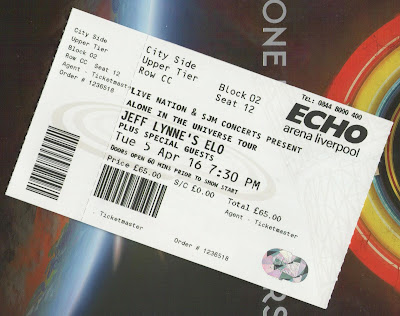 Find out what Jeff Lynne's ELO are up to by visiting their official web site via this link thus: