#1,097: Hello ... Hello ... my old friends ... It's great to see you once again! Perhaps it was written in the stars that Yours Truly KJS would get the opportunity to experience the spectacle of Jeff Lynne's ELO performing "Down Home Town" at The Genting Arena (formerly the NEC) in Birmingham last night (Saturday 16th April). But to be able to be there (with a little assistance from ELO superfan Dave Jones) 44 years to the day since ELO made their debut at The Greyhound in Croydon and knowing also that co-founder Roy Wood was in the proverbial building was clearly meant to be.

If the live bow of EJLO at Liverpool a week and a half ago was poignant and emotional, this concert was also atmospheric and all the more visually stunning as the ELO maestro, right hand man Richard Tandy and their merry band of electric light fantastic musicians took another packed house on a journey through the ELO songbook with a fair selection of hits, album trax and a two songs from latest Top 5 album "Alone In The Universe". The set list was slightly different with "When the Night Comes" aptly replaced by their first hit single "10538 Overture" and "Telephone Line" elevated to a slot betwixt "Wild West Hero" and "Turn To Stone" - but the effect was the same with nearly all the 14,000 originally seated onlookers actively standing, singing and shouting to every lyric that tumbled forth out of Jeff's mouth. This was a triumphant homecoming. A first live gig in Brum from Mr. Lynne in just over thirty years and not far from his beloved Shard End.
The mutual respect and admiration of ELO's fan base was enjoined by The Feeling who again delivered an energetic and powerful set of songs to energise their audience with front man Dan Gillespie Sells regularly citing the influence of ELO/Jeff Lynne on their own songwriting career whilst the band gave us a tempting taste of their own songbook and their self titled fifth album.
Highlights were many but the crowd reaction to "Livin' Thing" and "Wild West Hero" was amazing. For me, hearing "Secret Messages" live was again spine tingling and - with an improved view of the imagery and lighting, I was blown away by "10538 Overture" (especially knowing that Woody was in attendance) and "Turn To Stone". There is perhaps a need to include a song from "Time" in the set and the likes of "Calling America" or a medley would also be welcome.
How things have changed for ELO since that night in 1972 eh? Those of you going to the remaining dates on either side of the Atlantic are truly in for a treat. We look forward to a DVD/Blu-ray release for the AITU tour and, yes, I'm already counting down the 68 days to what will be my third EJLO gig in three months on Friday 24th June at The Barclaycard Arena (NIA) ... 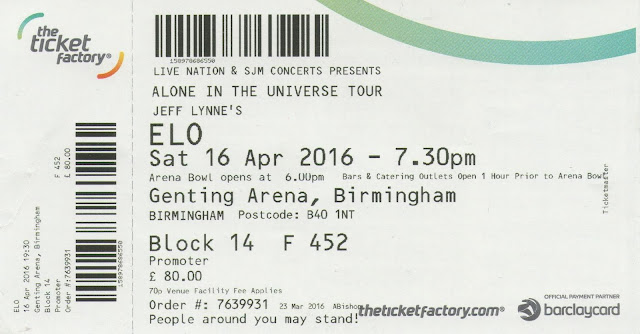 ELO Beatles Forever (ELOBF) recommends Jeff Lynne's ELO and The Feeling to those enlightened folks who love the music of ELO/Jeff Lynne, Roy Wood, The Move, 'Brum Beat', The Beatles and related artistes.