Xanadu Side A: ELO or ONJ? 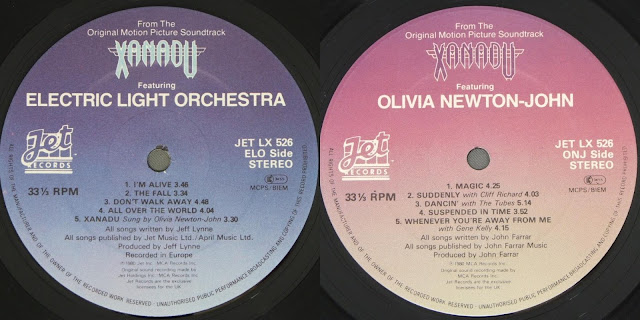 #1,077: Hello ... Hello ... my old friends ... It's great to see you once again! The long awaited debut of "Xanadu" on Blu-Ray earlier this month - and the subsequent arrival of said release today at ELO Beatles Forever [ELOBF] - has reminded Yours Truly KJS of a minor controversy from back in good old 1980. I remember having the odd friendly argument with fans of Olivia Newton-John back in the day [and occasionally since] as to whether the ELO Side or the ONJ Side was the A side on the original gatefold LP release [UK: Jet/MCA #JETLX526].

For me, the 'A' side had to be the ELO Side and for certain others it was not. Later CD re-issues, however, opted to list the ONJ tracks as tracks 1-5 and the ELO songs as tracks 6-10 but the original vinyl release didn't really define either, even the run-out matrix didn't settle the 'argument'.

In any case, the "Xanadu" OST was significantly more successful than the film, reaching #2 in the Official UK Album Top 75 with a 17 week chart run. "Xanadu" is a recording that has always divided the ELO fan base but the facts are that it provided ELO with their only #1 UK single and three other hit singles plus the Jeff Lynne's ELO live anthem "All Over The World".