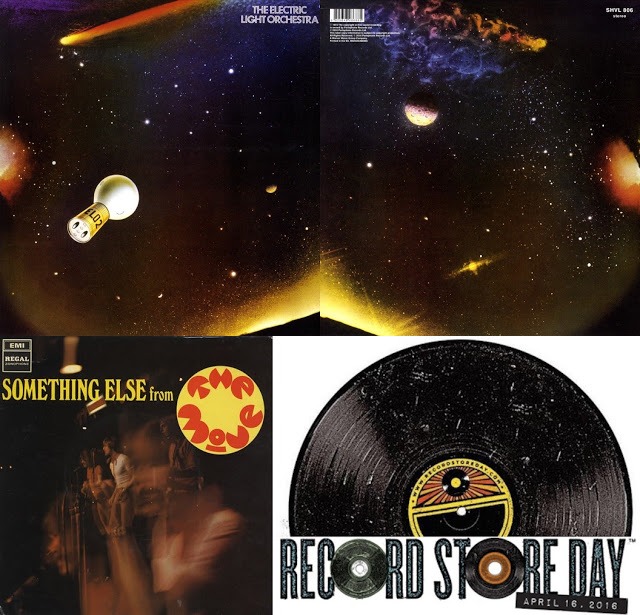 The gatefold album [Harvest #SHVL806] reached #35 when first released in 1973, and includes the tracks "In Old England Town [Boogie No.2]", "Momma", "Roll Over Beethoven", "From The Sun To The World [Boogie No. 1]" and "Kuiama", following the vinyl re-release of ELO's first self-titled album back in March 2012. Pre-orders can currently be placed with amazon.co.uk via this link thus: www.amazon.co.uk/ELO2-VINYL-Electric-Light-Orchestra/dp/B01BMW8DSU

Secondly, the legendary "Something Else from The Move" will form part of the roster of releases for Record Store Day 2016 with 1,000 copies being pressed by Esoteric Recordings [part of the Cherry Red Records group] for the event on Saturday 16th April. The five [5] track EP was recorded at The Marquee Club on Tuesday 27th February 1968 and features covers of "So You Want Yo Be A Rock 'n' Roll Star", "Stephanie Knows Who", "Something Else", "It'll Be Me" and "Sunshine Help Me".

Banquet Records, amazon.co.uk, modern-vinyl.com and our friends at A Jeff Lynne & Related Blog have also cited the "Something Else" EP as a RSD2016 release in advance of the forthcoming series of re-mastered, expanded re-issues of "Move", "Shazam" and "Looking On" later this year. Pre-orders can currently be placed with amazon.co.uk via this link thus: www.amazon.co.uk/SOMETHING-ELSE-MOVE-EP-VINYL/dp/B01CDT263E