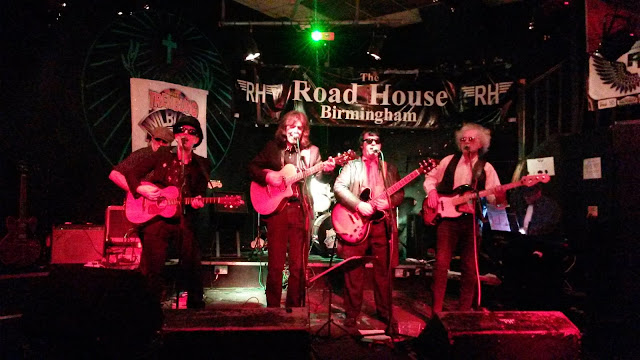 #1,071: Hello ... Hello ... my old friends ... It's great to see you once again! The return of The Trembling Wilburys to The RoadHouse in Birmingham on Friday 4th March was a date too good to miss for Yours Truly KJS in what, quite amazingly, was the first gig of the year for ELO Beatles Forever (ELOBF), after a few false starts.

The thirty mile trip to Stirchley was more than well worth it was the London based septet delivered another impressive set of classics by Roy Orbison, George Harrison, Tom Petty, Bob Dylan, Jeff Lynne (ELO) and, of course, The Traveling Wilburys that comprised thirty songs lasting well over two hours. The Trembling Wilburys are more than a tribute band, they are a unit and they truly bring the music of the Wilburys alive in a fashion that brings a smile to the face and joy to the ears. The first half of their set was dominated by the music of The Big O showcased by the amazing vocal prowess of Dave Collison. He was ably assisted by Glen Knowler, who is not only the ultimate George lookalike but also his audio doppelganger, and Andy McNish (who is both Bob Dylan and TP) with Marko Laver as Jeff Lynne.

The second set was mostly a wonderful trawl through the music of the beloved Traveling Wilburys that had those in attendance literally rockin' 'n' reelin' to the sounds of the world's greatest ever super group. Without doubt, a major part of what The Trembling Wilburys do is underpinned by the non-vocal contributions of top notch (if not legendary guitarist) Dzal Martin whose solo work during "When My Guitar Gently Weeps"(and not a few others) was breathtaking, Howard Robin's keyboard wizardry and, last but not least, the superb percussion of founder Dave Stark who, despite a heavy cold, was the backbone of another thoroughly enjoyable concert. So, if you love The Traveling Wilburys then you are sure to enjoy The Trembling Wilburys. Go see 'em folks! Find out more about The Trembling Wilburys and what they are up to via their official websites thus:

ELO Beatles Forever (ELOBF) recommends The Trembling Wilburys to those enlightened folks who enjoy the music of The Traveling Wilburys, ELO/Jeff Lynne, Roy Wood, The Move, 'Brum Beat', The Beatles and related artistes.