#1,038: Hello ... Hello ... my old friends ... It's great to see you once again! "Eldorado: A Symphony by the Electric Light Orchestra" was first released in the US (United Artists #UA-LA339-G) during September 1974. It was the bands first ever album to be certified Gold, rising to #16 in the USA Billboard 200. Back in the UK, "Eldorado" saw release a month later (Warner Bros. #K56090) and sadly, despite critical acclaim, it failed to enter the Official UK Album Chart - at least until 1978 when it was a part of the successful Top 40 boxed set "Three Light Years" (Jet #JETBX1).

I'd been after a decent copy of the original UK issue of "Eldorado" (K56090) for some time to replace my own long lost copy, until last weekend when I was fortunate to locate a near mint copy at the ELO Beatles Forever (ELOBF) recommended Vinyl & Vintage in Wolverhampton. As usual, when I got it home, I gave it a good clean and then discovered something rather unusual. 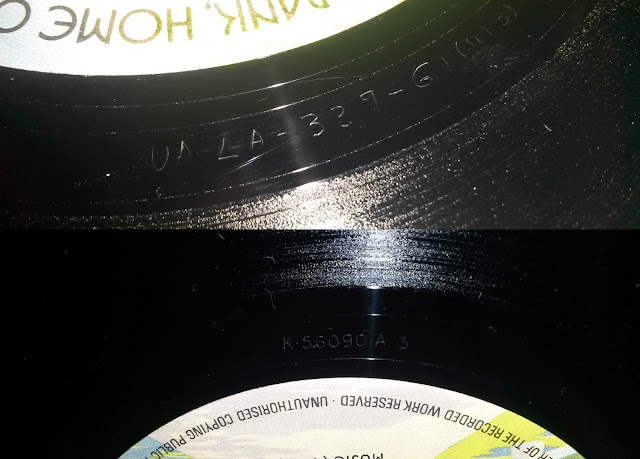 Yours Truly KJS noticed that the LP run-out was factory stamped not only with the expected "K56090" but it was also etched with "UA-LA339-G", the self same catalogue number for the US issue on UA. I therefore then checked with Sir Martin Kinch - from the legendary Cherry Blossom Clinic website - to see if the same markings were to be found on his copy and he confirmed the same and also that his copy of the UK Warner Bros. copy of "On The Third Day" (K56021) had no such issues.

This suggests that at least some editions of "Eldorado" could have been UA pressings relabelled with the Warner Bros. famed 'Burbank' label for the UK market. A similar thing happened with "Four Light Years" (JETBX2) - as detailed in this ELOBF article. Hence, once again, when it comes to collecting (and re-collecting!) ELO and related vinyl, you never know what "Discovery" you are going to make!