#1,034: Hello ... Hello ... my old friends ... It's great to see you once again! ELO Beatles Forever (ELOBF) are pleased to advise you that it looks very much like "Xanadu" - the 1980 musical starring Gene Kelly, Olivia Newton-John and Michael Beck featured in part the music, of course, of ELO - is due for release on Blu-ray (at the time of writing) in the United States on Tuesday 8th March next year.

"Xanadu" spawned four hit singles for ELO in the UK including the title track, their only UK #1 single to date in tandem with Olivia Newton-John. Some ELO fans love it and others avoid it but a Blu-ray edition of "Xanadu" will please a fair section of the fan base, with hopes of some additional special features above and beyond the basic DVD release back in 2004. This is a wonderful reward for those loyal fans of the film who have campaigned tirelessly in recent years for Universal to put out a Blu-ray edition. 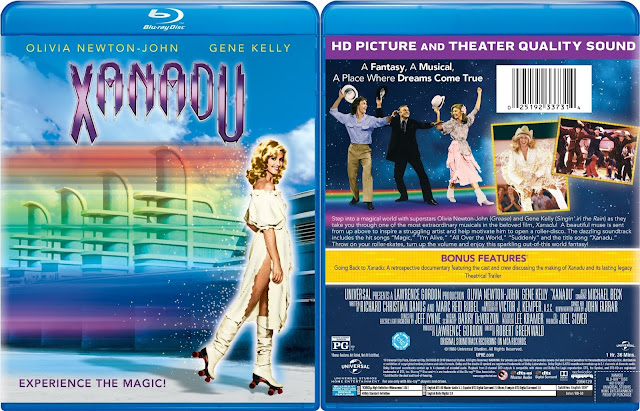 The popularity of "All Over The World", the opener for Jeff Lynne's ELO for their September 2014 Hyde Park triumph and the title of their best-selling career compilation may also fuel decent sales. Whilst we await (hopefully) details of a UK/European release, folks in the US can currently pre-order the "Xanadu" Blu-Ray Edition from amazon.com via this link thus: