Jeff Lynne's ELO in the Mix for BBC Music Award 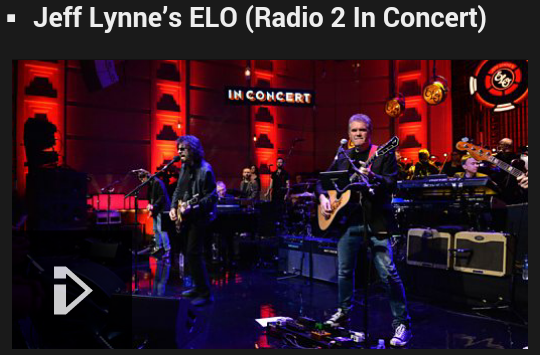 #1,020: Hello ... Hello ... my old friends ... It's great to see you once again! Fans of ELO/Jeff Lynne will be watching events closely at the BBC Music Awards being held at The Genting Arena (NEC) in Birmingham next week with Jeff Lynne's ELO having been nominated for another prestigious award: BBC Live Performance of the Year - in recognition of the successful return of the ELO maestro in that light fantastic live BBC Radio 2 'In Concert' broadcast back on Thursday 12th November. The competition is tough with Adele, Florence & The Machine and Lionel Richie also in the running for the award, among not a few other artistes. The event will be broadcast simultaneously on BBC One and BBC Radio 2 from 8PM until 10PM on Thursday 10th December and will be available to view on BBC iPlayer thereafter.

ELO Beatles Forever (ELOBF) is wishin' and hopin' - to quote "Sweet Is The Night" - that the ELO maestro will land another accolade to round off a magnificent year in fine style.