#1,031: Hello ... Hello ... my old friends ... It's great to see you once again! Two things that are guaranteed when Roy Wood lands at The Robin 2 just before Christmas is a full house and a great night. And so it was last night (Sunday 20th December) as the founder of The Move, the Electric Light Orchestra (ELO) and Wizzard delivered a storming if not energized set of thirteen songs to showcase an amazing songwriting career, whether it be those much loved Wood penned Sixties classics, his Seventies smashes or his more recent jazz influenced rock 'n' roll compositions.

Whilst it could be said to be true that you know what to expect when Roy Wood rolls into town with his superb rhythm and brass octet, the truth of the matter is that such is the charisma when Woody (and his band) arrive on stage, that it doesn't really matter which songs (familiar or not) he performs because the man still continues to command the respect and attention of his many follower and fans, even at the age of 68 years young. This was more than evidenced by the gig last night as Roy conducted his mutual appreciation society, jumping with ease between his Move, Wizzard and those classy newer songs.

Highlights of the night were many with (again) "See My Baby Jive", a rousing "California Man" and the obligatory Christmas classic sending the packed house home happy and completely merry - with or without the influence of certain alcoholic beverages! Yet what made the night for me was the sight of a few brave souls waiting patiently outside to catch an autograph or a photograph with their hero. I saw one gentleman leaping around like a teenager with his newly signed copy of the first ELO album and some German fans - who had travelled over to Bilston just for the gig - over the moon after finally meeting their hero, whooping and hollering in sheer delight. And summing up perfectly this particular Roy Wood gig. 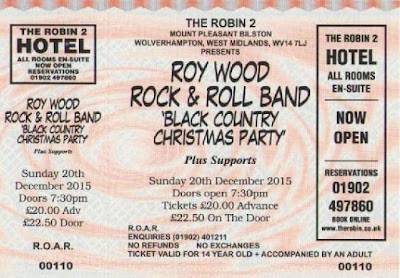