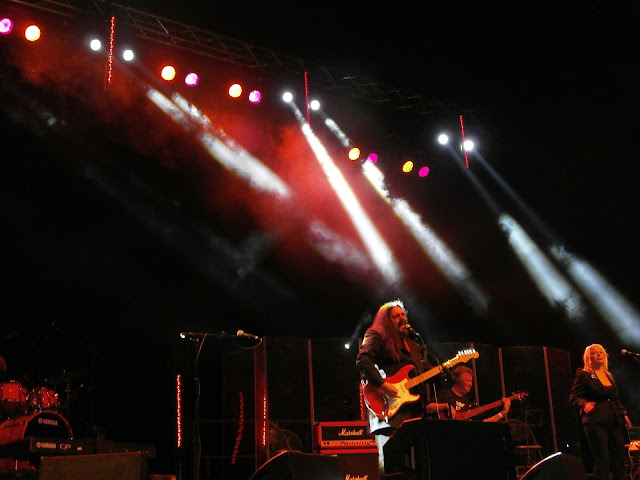 #1,023: Hello ... Hello ... my old friends ... It's great to see you once again! The Move, ELO and Wizzard founder Roy Wood invited some old friends (and a few new ones) to deliver another festive cracker with his annual Christmas bash Rockmas at The Barclaycard Arena (NIA) last night (Sunday 6th December).

Andy Fairweather Low & The Low Riders - sporting, of course, former Wizzard man Nick Pentelow in their ranks - made a welcome return following up their successful appearance last year at Birmingham Symphony Hall with a impressive hour long set which included not only the familiar with "High In The Sky", "Bend Me Shape Me", "If Paradise (Is Half As Nice)", "Hymn 4 For My Soul" and "Wide Eyed And Legless" but also some fantastic live renditions of classics including "Tequila", "Peter Gunn", "Apache", "Route 66" and "Puttin' On The Style". AFL will be celebrating 50 years in the business next year and, judging by this performance, we will have even more to look forward to next year.

There were some raised eyebrows when Roy announced that Rockney duo Chas & Dave would be joining him for Rockmas in 2015 but Yours Truly KJS was rather taken with the idea of seeing the legendary Londoners perform for the first time. Their twenty minute cameo, slotted nicely in the midst of Roy's set, truly got the crowd going on the back of some superb comedy from the wisecracking and (still) very funny Mick Miller. Both Messrs. Hodges and Peacock were immediately if not enthusiastically urging those in attendance to join the party as they launched into the expected "Rabbit" before a wonderful rendition of "Ain't No Pleasing You", more than ably supported by Roy's Rock & Roll Band. They returned for the finale (for a certain Christmas song) proving themselves an inspired choice of guests.

The main event - as it always is - is the entrance, cander and sheer on stage personality of Roy Wood and his magnificent eight piece rock 'n' roll brass outfit. There were no new songs in his balanced thirteen song journey through his amazing Move and Wizzard songbook and his ever more familiar recent songs - but it didn't matter because we are talking about Roy Wood. His record still stands the test of time and, if nothing else, this concert once again proved that there is much more to Woody than his Christmas classic. Whether he's fiddling with an in-ear headphone, supping beer, manhandling bagpipes or sharing the stage with the Birmingham Irish Pipes and Drums band, Roy Wood always has stage presence. Seeing and hearing the likes of "California Man", "Flowers In The Rain", "See My Baby Jive" and an orchestrated "Blackberry Way" is always an absolute joy. Top that with "I Wish It Could Be Christmas Everyday" and you have another amazing brew from this particular Wizzard. 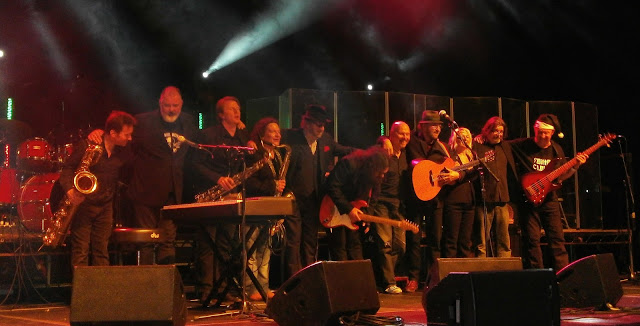 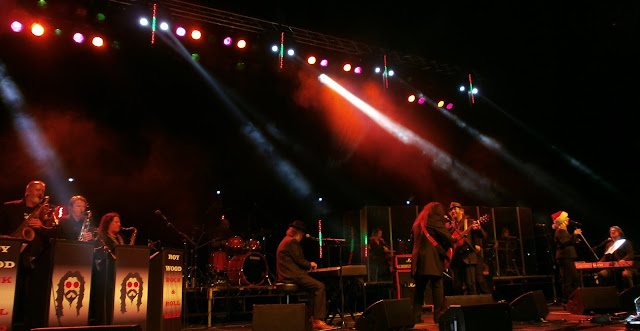 Roy Wood should have the recognition he truly deserves, both in his hometown, the Midlands and beyond. Yes, we still await that new Roy Wood album "American Songbook" and/or a DVD. Some might say that he is resting on his laurels and that there is nothing new. But I beg to differ. If Roy Wood was afforded the resources of a forward looking, supportive record company, this writer has no doubt that he could also return to the album chart and still have an impact - as Jeff Lynne has in the last few years. In the meantime, you should take the opportunity to go see Roy Wood live. Although his regular gig at The Robin 2 on Sunday 20th December is now sold out, there are still four dates to choose from thus: