ChartWatch: Global Success for Alone In The Universe 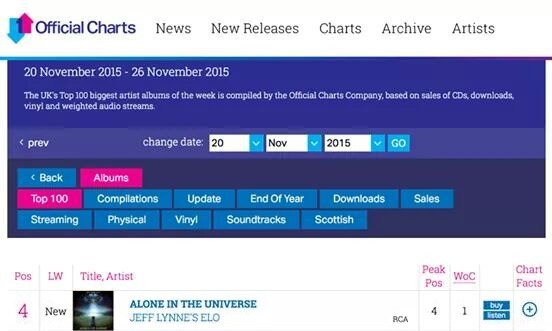 #1,014: Hello ... Hello ... my old friends ... It's great to see you once again! "Alone In The Universe" - the long awaited new release from Jeff Lynne's ELO - is beginning to hit official album charts worldwide and is already looking good to be an amazing global success for the ELO maestro having already hit the Official UK Album Chart at #4 and the Top 10 in six [6] other countries - at the time of writing.

ELO Beatles Forever [ELOBF] is now in the process of collating those global chart positions [see above]. Please keep checking back for more updates as we await the confirmation of where "Alone In The Universe" lands in the US Billboard 200 and other countries worldwide!

ELO Beatles Forever [ELOBF] recommends "Alone In The Universe" by Jeff Lynne's ELO to those enlightened folks who enjoy the music of ELO, Roy Wood, The Move, The Idle Race, 'Brum Beat', The Beatles and related artistes.