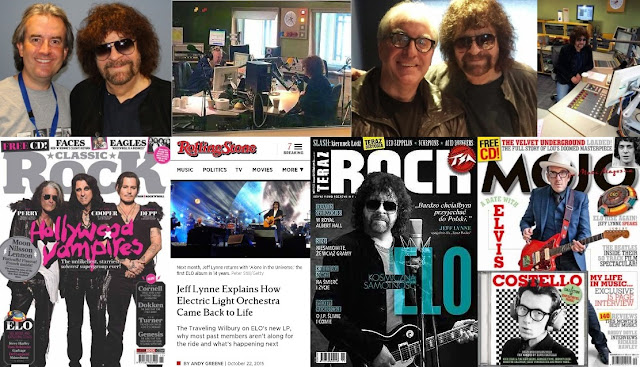 #997: Hello ... Hello ... my old friends ... It's great to see you once again! Jeff Lynne's visit to the UK during the last days of September has been very fruitful for fans of the ELO maestro, yielding at least three high profile radio interviews alongside an ever increasing number of magazine and newspaper interviews in advance of the new Jeff Lynne's ELO album "Alone In The Universe" (out on Friday 13th November) and lead single "When I Was A Boy" (released Friday 25th September).

Jeff called in on The Chris Evans Breakfast Show on Friday 12th September and he participated in at least two further radio interviews with Billy Sloan at BBC Radio Scotland (broadcast on Saturday 3rd October) and Ian Danter at Planet Rock Radio (broadcast on Sunday 25th October) during his visit. Interviews with Jeff have also appeared in The Sunday Times supplement, Classic Rock and Rolling Stone magazines with more to be published soon in MOJO and Poland's Teraz Rock to name a few.

And we can look forward to a return visit from Jeff Lynne to UK shores in November (at the very least) in order to promote "Alone In The Universe", to appear on the bill at the Royal Variety Performance on Friday 13th November (the album release date) and also on one of Chris Evans' resurrected TFI Friday shows (ten episodes are scheduled between 16th October and 18th December so Jeff could make an appearance on either the 6th or 20th November editions).

These are great days indeed for fans of ELO and Jeff Lynne as we await confirmation of those highly anticipated live UK/Ireland dates featuring Richard Tandy and the Take That touring band in Spring 2016 (and hopefully some in the US thereafter too).