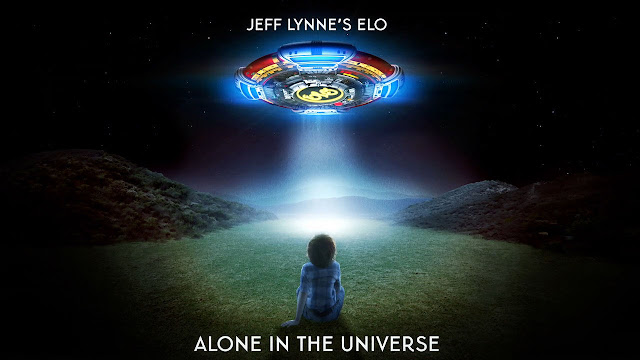 #993: Hello ... Hello ... my old friends ... It's great to see you once again! The release of "Alone In The Universe" - the much anticipated new album from Jeff Lynne's ELO - on Friday 13th November is now just under four weeks away and we are already beginning to get an idea of what to expect.
Two tracks have now been made available for download: lead single in "When I Was A Boy" (released Friday 25th September) and "When The Night Comes" (released Friday 16th October) with another two songs: title track "Alone In The Universe" and "I'm Leaving You" played by Billy Sloan on BBC Radio Scotland during his interview here with the ELO maestro back on Saturday 3rd October. ELO Beatles Forever (ELOBF) have compiled UK, US and Japan pre-ordering links for the album and both released tracks and they are listed below. You can also check out the official ELOVEVO YouTube videos (to date) for "When I Was A Boy" and "When The Night Comes" below thus:


ELO Beatles Forever (ELOBF) recommends "Alone In The Universe" by Jeff Lynne's ELO to those enlightened folks who enjoy the music of ELO/Jeff Lynne, Roy Wood, The Move, The Idle Race, 'Brum Beat', The Beatles and related artistes.