Now & Then: A Beatles Anthology Enigma 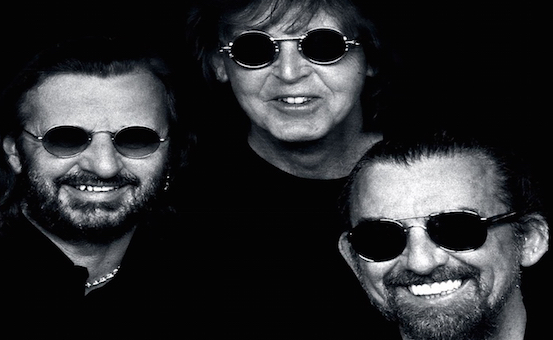 #962: Hello ... Hello ... my old friends ... It's great to see you once again! Like many fans of The Beatles and ELO, I was thrilled with the results of the production of Jeff Lynne for the two Beatles singles issued as part of the Beatles Anthology series during 1995 and 1996. Initially penned by John Lennon, both "Free As A Bird" [#2] and "Real Love" [#4] were substantial hit singles and fitting additions to the Beatles hit single roster, thanks to the added input of Paul McCartney, George Harrison and Ringo Starr. Fans will know that the series consisted of two singles and three albums [as well as an excellent TV documentary and book].
That there could have been a third Beatles single at the time [and still could be] had there been maybe a little more patience and perhaps slightly better source material means that there remains the tantalising prospect that the haunting "Now And Then" might be fit for release one day yet future.
Both Paul McCartney and Jeff Lynne are on record [see above] as stating that this lost John Lennon treasure was started and curtailed with the Beatles legend suggesting that all is not lost and that he may still be amenable to another crack at it with the ELO maestro. A listen to the original demo of "Now And Then" [see above] continues to makes this writer wonder as to what a finalised version would sound like.