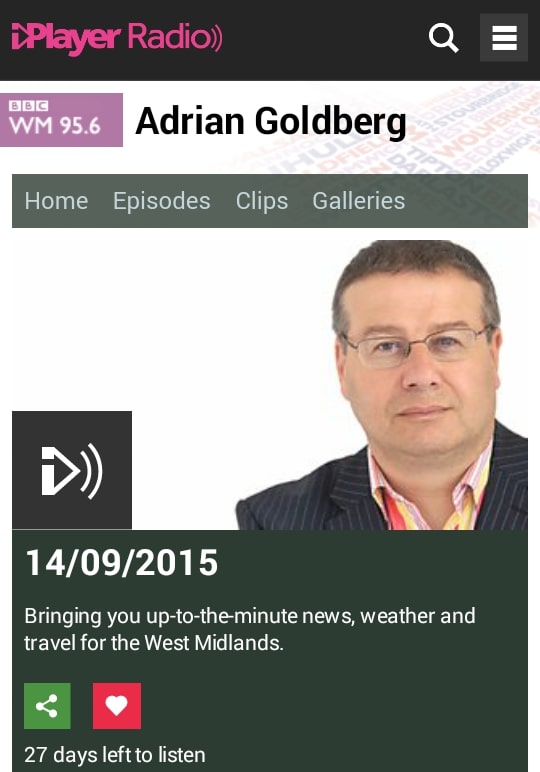 #974: Hello ... Hello ... my old friends ... It's great to see you once again! Whilst I was in downtown Birmingham last Sunday 13th September for that fantastic Morganisation gig (read this review) and quite "Out Of The Blue", BBC Radio WM 95.6 contacted Yours Truly KJS at ELO Beatles Forever (ELOBF) requesting an interview on the subject of the newly inked global record deal with Columbia Records by Jeff Lynne's ELO (read this article) and by extension the forthcoming new album.

The interview took place with DJ Adrian Goldberg via telephone the next morning (Monday 14th September), a little after 7:20AM and - after a number of requests - I've transliterated the interview and present it below for your kind perusal thus:

AG: “So the news that fans of this band have been waiting for for fifteen years: [plays excerpts from “Mr. Blue Sky”, “Sweet Talkin’ Woman”, “Mercy, Mercy” and “Evil Woman”] That’s great isn’t it? Just some of the greatest hits from the legendary Birmingham singer, songwriter, musician, producer, tea maker. What can’t he do? The leader of ELO, Jeff Lynne and the band have signed a global deal with Columbia Records and is set to release their first album in fifteen years! Keith Sinclair from Wolverhampton is a blogger at ELO Beatles Forever. Hello Keith, how are you mate?"
KJS: “Good morning Adrian. How are you?”
AG: “I’m very good. Now listen. When ELO were in their pomp, I was a bit of a punk rocker! Now, when I listen to those things, what great music!”
KJS: “I think it’s a lost heritage of the Midlands. A band that was not trendy to like, apparently - according to the media - is now back in the high life. Things have gone full circle, it’s a great thing to hear.”
AG: “I interviewed Jeff last year when he got his star on the ‘Walk of Stars’ on Broad Street in Birmingham and I know that he’s aware of the affection that people in this area have for him but as a fan Keith, did you think that the days of ELO albums had gone forever?”
KJS: “I think that with the success of his comeback, he re-did the ELO tracks for the “Mr. Blue Sky” album and his comeback with his solo album “Long Wave”, that invoked a great deal of enthusiasm. Certainly, the last album “Zoom” back in 2001 was ... a long time ago! A lot of people thought that he was doing a lot of work for other artists and "Are we ever going to see an album?" but I kind of kept a light lit and I’m really pleased to hear that he’s coming back as Jeff Lynne’s ELO on the back of all that success at Hyde Park.”
AG: “Yes, a big, I think BBC concert wasn’t it? And again you know people just sort of reminded because you forget sometimes. Then you hear track after track after track, great hit after great hit after great hit played out. “Oh! They’re really good!” And ELO, which essentially is Jeff Lynne and whichever group of musicians he chooses that week are, you know, a terrific band. And you mentioned the fact that he had gone back hadn’t he and he’d gone over ELO’s greatest hits and sort of re-dubbed them, re-mastered them and maybe that just reminded him of what he’d been missing as a performer.”
KJS: “Certainly, and with a song book of 27 UK Top 40 singles - and you’ve played some of those hits this morning - it’s a tremendous heritage for him, for the work he’s done since his days with The Idle Race, obviously The Move, and the work he’s done with the Wilburys and people who are basically musical heroes. I was in Birmingham yesterday, funnily enough, looking at the new DVD that’s out, it’s gone straight to number one, the second Blu-ray number one of the year for Jeff and the band. He’s riding on the crest of a wave to quote one of the singles and it’s great to be an ELO fan again. I used to get a bit of trouble at school about that!”
AG: “It would have been someone like me giving you trouble as well Keith but, you know, I’m more than willing to doff my hat! What do you know when you’re fourteen and fifteen about music, about what’s fashionable or what you think your mates will like? I wouldn’t turn my back on any of the music I used to love then but your musical tastes broaden I think and you just have to give a nod to the genius that is Jeff Lynne. Great to speak to you Keith, thank you. Keith Sinclair from Wolverhampton, blogger at ELO Beatles Forever on the return of, yes Pete you said it, Shard End’s finest: ELO!”

My interview can be found between 24:03 and 29:07 on BBC iPlayer Radio up until Tuesday 13th October via this link thus: