#970: Hello ... Hello ... my old friends ... It's great to see you once again! It was an easy decision to make the short train trip to Birmingham's Old Joint Stock Pub & Theatre venue earlier today (Sunday 13th September) to finally get to see Morganisation - the musical quintet headed up by former ELO member Dave Scott-Morgan - perform live. And if this was a toe in the water by the ex-Uglys and Magnum man to see what the reaction to his wonderfully entertaining multi-media show of original songs, ELO covers, Rock 'n' Roll classics, probing questions (from his talented wife Mandy, of course!) and some remarkable storytelling of his journey through 'Brum Beat' to being a part of the Electric Light Orchestra and beyond, it was a superb success.
Morganisation managed to squeeze in 27 songs in a two (2) hour set balanced (with an impressive visual backdrop) that included a nice spread of songs from the Morgan album "Across The Divide" (reviewed here), a quartet of ELO hits, some Beatles and Bob Dylan as well as new song "Knower". We also got to see "Hiroshima", some "Spaceship Earth" and a little "Something" else. Tales of dealing with Don Arden and meeting George Harrison meant that all bases were covered. This was no concert, it was an experience of the career of one of Birmingham's unsung music talents. And it works really well judging by the fun had on stage and by the delight of the packed house looking on. We look forward to seeing Morganisation out and about regularly at theatres and venues soon. Go see 'em folks! 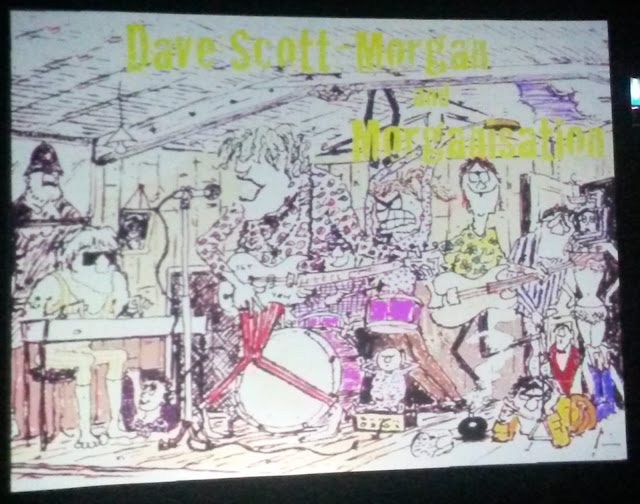